Zaha Hadid Architects has won planning permission for the world’s first wooden football stadium, which will be built in Gloucestershire, England.

When complete it aims to be the world’s greenest football stadium, constructed entirely from timber and powered by sustainable energy sources.

It was the second attempt to gain planning permission for the 5,000-seat timber stadium for the Forest Green Rovers football club, after the original proposal was blocked by Stroud’s local council in June 2019.

Zaha Hadid Architects (ZHA) changed the stadium design to include an all-weather pitch and included a different landscaping strategy. This was to mitigate worries that the stadium design did not sufficiently make up for the loss of green fields it will be built on.

Local councillors in Stroud had also cited concerns that the 20-metre-high timber stadium could detract from the views of nearby historic hamlets, and fears that a £7 parking charge could tempt people to park for free on verges instead.

ZHA’s stadium design was voted through by six votes for and four against on 18 December 2019.

“This building is iconic, it could be a tourist attraction,” Councillor Miranda Clifton said of the new timber stadium.

“At the moment we are known for our waste incinerator.”

ZHA won the competition to design the stadium for Forest Green Rovers Football Club in 2016. It will be built entirely from sustainably sourced wood, including the cantilevering roof and louvred cladding.

A transparent membrane will cover the stadium, allowing the grass to grow under the sunlight and minimising shadows that could distract players during the game. 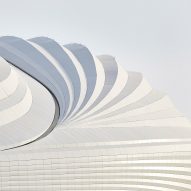 “The importance of using wood is not only that it’s a naturally occurring material, it has very low carbon content – about as low as it gets for a building material,” Vince said when the competition-winning design for the timber stadium was announced.

“Our new stadium will have the lowest carbon content of any stadium in the world,” he added.

“This really will be the greenest football stadium in the world.”

The stadium will be part of the new Eco Park, a green technology business park planned for junction 13 of the M5 motorway.

Forest Green Rovers has already been named the world’s greenest football club by FIFA. The players have adopted a vegan diet to reduce their carbon footprint, and only vegan served is served on match days.

The current stadium has an organic grass pitch watered with recycled rainwater and uses solar panels to power its floodlights. The pitch is mowed by an electric “mow bot” that uses GPS technology to automatically cut the grass, with the grass clippings given to local farmers to put on their soil.

Kengo Kuma has recently completed the latticed wood National Stadium in Japan, for the Tokyo 2020 Olympics, which has a steel canopy. The original design by Zaha Hadid was controversially scrapped in 2015.

READ  What is the Laughing Cavalier not wearing? The great British art quiz

Images are by Negativ.

The northern view: Leeds through the decades – in pictures

Wing and a prayer: the bizarre Chicken Church of Java

From V-Max to V8: Sydney’s only drive-in cinema reopens – in pictures

A comic for Covid-19: the tale of a plague-hit Derbyshire village

C.G. Jung’s The Tree of Life: from Norse gods to eastern mysticism