Unhealthy snacks to be banned from checkouts at supermarkets in England


Supermarkets in England are to be barred from displaying unhealthy food and drinks at checkouts or using them in buy one, get one free offers, as part of a proposed government crackdown on obesity.

The planned restrictions were praised by health campaigners as a “bold first step” in Downing Street’s promised campaign against obesity.

The checkout restrictions will apply to other sales-boosting locations such as the entrances to stores or at the end of aisles. Similar rules will apply for websites, banning sales links to unhealthy foods on places such as homepages, or at checkout or payment pages. Restaurants will no longer be able to offer free refills of sugary drinks.

The restrictions will not come into force until April 2022, and will be subject to a consultation process first.

The rules about promotions – which would also stop all bulk buy offers on high-fat or high-sugar food and drinks – would only apply to larger retailers, those with 50 or more employees. The limits on where unhealthy foods can be located is for shops over more than 2,000 sq feet, with exemptions for specialist retailers such as chocolate shops.

It follows Boris Johnson’s pledge earlier in the year to reduce levels of excess weight and obesity. Johnson made the commitment after his serious bout of coronavirus, which the prime minister believed was exacerbated by the fact he was overweight.

The plans were welcomed by campaign groups, with Action on Sugar saying ministers should resist any lobbying efforts by the food industry.

Prof Graham MacGregor, the group’s chair, said: “Finally, Downing Street is acting decisively with a bold first step to restrict the sale of junk food on multi-buy offers and at checkouts, and taking on one of the biggest threats to Britain’s future health – childhood obesity.”

Caroline Cerny from Obesity Health Alliance, which groups together more than 40 health organisations, medical colleges and campaign groups, said the hope was promotions would be put on healthier foods.

She said: “Retailers won’t be able to tempt us to impulsively buy tins of sweets in supermarket entrances … The new rules won’t apply until mid-2022, so the retail and food industry have plenty of time to prepare and shift their promotions over to healthier food and drinks.”

Diabetes UK’s head of policy, Helen Kirrane, said the restrictions were a “positive step towards helping people across the UK to make healthier choices when it comes to their food shop”.

The definition of high-fat or high-sugar food and drink will be based on existing guidelines but includes items such as chocolate and sweets, crisps, soft drinks and sugary milk or juice drinks, cakes, pastries and puddings, biscuits, cereals, yoghurts, pizza, ready meals and chips.

The government argues that rather than saving people money, promotions on unhealthy items tend to mean people simply buy more, while end-of-aisle displays can boost soft drinks sales by 50%.

“Creating an environment which helps everyone eat healthier foods more regularly is crucial to improving the health of the nation,” said Jo Churchill, the public health minister.

In England 63% of adults are classified as overweight or living with obesity, while a third of children leave primary school overweight or obese. 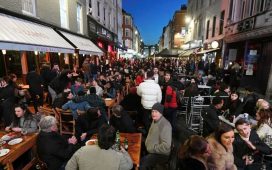