Developer Unboxed Homes has created a terrace of customisable homes in Peckham, south London, which were designed by architecture studio Poulsom Middlehurst.

Described by the developer as “London’s first custom-build homes”, the houses on Blenheim Grove were designed to be sold as structural shells so that people buying the properties could customise the interior layouts and finishes.

“We believe that we are the first to offer ‘new build shells’ to Londoners,” said Unboxed Homes founder Gus Zogolovitch.

“We are not trying to maximise our returns at Blenheim Grove, we are trying to make something new,” he told Dezeen.

“Building an airtight, watertight, structurally sound shell which has the flexibility for customers to design a space that works for them.”

Each of the three-storey houses was designed by Poulsom Middlehurst so that a variety of layouts could be created within the split-level buildings.

Unboxed Homes could then sell them either as raw weathertight structures or as finished homes.

The developer believes that the partially finished homes give buyers the flexibility of a self-build home, but without much of the associated hassle.

“There are literally millions of people who would like to self-build their own home,” said Zogolovitch. “However, this remains really hard.”

“The idea of Blenheim Grove was to make it easier for people to self-build by having us do a lot of the work for them,” he continued.

The homes are an example of a slowly emerging trend for customisable homes, said Zogolovitch.

“Custom build is when a developer gets involved in the process of a self-commissioned home,” he said. 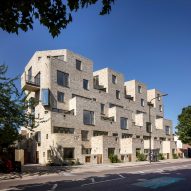 “In our case at Blenheim Grove, we have built the shell, in other cases in other parts of the country, customers buy serviced plots and then build their own homes,” he continued.

“Custom build has the opportunity and chance to make self-build a reality for many hundreds of thousands if not millions more people.”

The five houses, two of which have now been split into apartments, stand alongside a railway track near Peckham Rye Station.

As the site narrows, the smallest house is nearest the station with the largest at the other end of the terrace.

The homes were built in light brick and each have a sunken outdoor space alongside the road and a large terrace between the second and third floors.

“We wanted to create a terrace of shells, which we felt struck the right balance between leaving the owner with enough scope to be creative and to fit it out themselves and yet to remove a lot of the headaches of self-building,” said Zogolovitch.

Although Zogolovitch is extremely positive about the benefits of custom-build housing, building the terrace at Blenheim Grove was delayed by several years.

“The development has taken far longer than expected,” said Zogolovitch.

“The complexity of what we are doing, while simple to explain, is completely new in the development landscape,” he said.

“This means that every single person on the project had to operate at the top of their game – sadly our industry is rife with people who take little pride in what they do and we had to deal with lots of problems on site. This led to delays which led to customers dropping out of the project.”

To date, Unboxed Homes has sold four of the houses, including the two that were split into apartments.

“We have now finished the shells and have sold four – with just one home remaining, which we will be fitting out to a basic specification – the idea being that people want space not specification – it’s another experiment!”

Despite the issues on the project, Zogolovitch believes that custom build could be one solution to supply the houses needed in the UK.

“We are unquestionably in a housing crisis – not only do we build poor quality poorly designed homes, but they are also environmentally damaging and very poor value for money,” he said

“If we want to change the hegemony of the volume house-builders we need to create houses that are fit for 21st-century living,” he continued.

“It is by putting the power of choice into the hands of the occupier that we will break the crisis.”

From utopian dreams to Soho sleaze: the naked history of British nudism

Banksy Most Wanted review – the king of guerrilla art … or a cringy sellout?