The government must convince landlords to forego some of the rent built up during the pandemic or face a wave of insolvencies when payments fall due in July, business leaders have warned.

Speaking at a Treasury select committee hearing, trade body bosses in travel, hospitality and retail said the easing of restrictions was not enough to avoid business failures and job losses in debt-laden sectors.

Retail and hospitality businesses alone have built up a combined £5bn of rent debt, with a moratorium on demands for commercial rent arrears due to expire on 1 July.

The boss of UK Hospitality, Kate Nicholls, warned that a third of the trade body’s members – who have 90,000 venues between them – were expecting back-dated rent demands the moment the moratorium ends, even though many still are not able to trade.

“We have a very real problem on our hands if the moratorium is lifted without a resolution being put in place,” said Nicholls.

“You’re going to have a long Covid for the economy if you’re not very careful.”

British Retail Consortium boss, Helen Dickinson, said: “Here we are two weeks out from when the deadline is going to crystallise and we still don’t know what’s going to happen.”

Nicholls said several trade bodies had proposed a scheme that would involve the government brokering a deal under which landlords forgive up to 50% of pandemic debts but that there was still no clarity on the way forward.

Mark Tanzer, chief executive of travel trade body ABTA, said his industry had been even harder hit, with tourism still nigh-on impossible after Portugal was suddenly removed from the “green list” of safe destinations.

Tanzer called for measures including grant support for the travel sector, pointing to schemes in the Netherlands and France that topped up revenues by as much as 100%.

He called for a “step change” in the government’s attitude to travel and warned that Britain risked “losing a generation of travel companies if we don’t act”.

Ikea fined €1m by French court for spying on staff 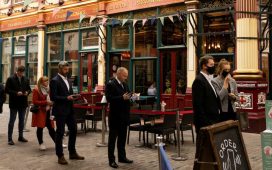