The world’s longest undersea electric cable is set to be switched on this week, as testing begins for the 720km interconnector that will trade power between the UK and Norway.

Electricity will start flowing through the €2bn North Sea Link in coming days, with the joint venture between the UK’s National Grid and Norway’s Statnett due to begin formal operations in October.

Interconnectors are a key part of the UK strategy for cutting emissions and boosting offshore wind because they allow the UK grid to share or import power depending on supply and demand.

Nigel Williams, construction director of the North Sea Link, said the cable would allow the UK to “maximise the use of renewables and the extensive hydro power network in Norway”, replacing electricity from fossil fuels.

It is like a sausage in the sea. The cable is static — it is just there

The cable can carry as much as 1.4GW of power — about the capacity of a nuclear reactor.

On windy days when the UK has excess power from offshore wind, the cable will allow it to export power to Norway. On calmer days the UK can import electricity from Norwegian hydropower.

It could help lay the foundation for ever bigger interconnector projects in future — including prospects such as the Sun Cable between Australia and Singapore and the IceLink between Iceland and the UK.

The cable has been connected, laid down and buried on the sea floor. Testing will begin this week with low-voltage settings before ramping up to high voltage in coming weeks.

See also  At last, divestment is hitting the fossil fuel industry where it hurts | Bill McKibben

The most challenging part of the engineering project was laying the cable across the North Sea and the Norwegian fjords, according to Williams. Specialised cable-laying boats, which can carry as much as 10,000 tonnes of the heavy cable, cannot operate in rough weather.

“Putting a cable across the North Sea was a bit of an unknown challenge, especially the costs in engineering associated with the weather,” said Williams.

The project also had to build a specialised barge to lay cable across a remote Norwegian lake.

Now that the cable is in place, it is expected to stay put for the next 50 years or so. “It is like a sausage in the sea,” said Williams. “The cable is static — it is just there.”

The 50-50 joint venture between Statnett and National Grid will split revenues evenly between the two companies.

As the UK increases its reliance on intermittent power sources such as offshore wind, it will need more interconnectors to help balance power supply and demand.

Interconnectors supplied about 8 per cent of UK power in 2019, a figure that is expected to rise to as much as 19 per cent within the next five years.

A recent government energy white paper estimated the country would need 18GW of interconnector capacity by 2030, up from about 6GW operating today.

National Grid’s next interconnector, Viking Link, will connect the UK and Denmark in 2024. ElecLink, a cable between France and the UK that runs through the Channel Tunnel, is expected to be completed next year.

Even if Covid hits shares, we must not inflate another cheap-money bubble

Chancellor limbers up for bitter row over pension triple lock 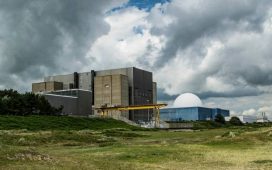