A “rich and interesting” refurbishment of a Victorian house by Studio Ben Allen has been named London‘s best new home improvement project in the Don’t Move, Improve! awards.

The House Recast is the overall winner of this year’s contest, which is organised annually by New London Architecture (NLA) to showcase the diversity of homes in the UK capital.

Studio Ben Allen was invited to overhaul the dwelling by a retired couple who wanted to reorganise its layout while introducing a new kitchen and two bathrooms.

With an otherwise open brief, project architects Omar Ghazal and Ben Allen decided to use the project as an opportunity to experiment with off-site fabrication techniques and pigmented concrete for the home’s structure and finishes.

The architects said this was inspired by the house’s original Victorian design, “where the brickwork is patterned and decorated, while also being a load-bearing material and having the speed and quality by being fabricated offsite.”

It was this unconventional approach and the way it complements the house’s original features that led the project to be crowned the overall winner by the jury.

“It feels very much like a modern intervention, but it feels completely in keeping with the period of the property and the original motives,” reflected jury member and architect Melissa Dowler.

“I think there’s something really rich and interesting there in that relationship and I think they’ve played off that really nicely, without falling into pastiche or cliche.”

The competition is open to home improvement projects completed in the last two years in any one of London’s 33 boroughs.

The House Recast was selected as the winner for 2021 from a shortlist of 22 projects revealed on 24 March.

Eight other shortlisted projects were also recognised in the awards, including A Cloistered House by Turner Architects, which won the prize for Urban Oasis of the Year. 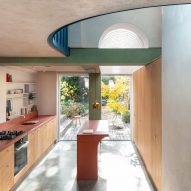 Meanwhile, a playful revamp of a family home by CAN was the recipient of the Unique Character Prize. The project includes a rear extension topped by a fake mountain.

Two and a Half Story House by B-VDS Architects and a council house renovation by VATRAA were jointly awarded the prize for Compact Design of the Year.

This year, the programme also introduced an award for Work From Home Design of the Year, which was given to Sonn for its green terrazzo-clad garden studio.

A prize for Best Project under £100k was given to ER Residence – a pared-back overhaul of a north London flat by Studio Hallet Ike that included a blackened timber extension.

The final award, the Materiality & Craftsmanship Prize, was given to Hayhurst and Co for its remodel and extension of a semi-detached residence called Grain House.

Previous winners of Don’t Move, Improve! include a “beautifully understated” rear extension by Proctor & Shaw and a home created within the shell of a derelict chapel.

Virgil Abloh – a life in pictures

Developers challenged over carbon footprint of new buildings in UK