As one of the big sponsors of this month’s Glasgow climate summit, SSE is fluent in COP speak.

The buzzword bingo rather muddies what SSE was trying to do, which is set out a clear case against a break-up pushed by activist hedge fund Elliott Management and others that would split SSE’s renewables business from the rest of the group.

SSE is no Shell, which argues it needs to hang on to fossil fuels to fund the green transition. It has already winnowed its business so both main parts stand to gain from the energy shift.

It has UK electricity networks, which should benefit from rising demand as consumers switch from fossil fuel powered cars and gas central heating to electric vehicles and heat pumps. And its renewables business has onshore and offshore wind and hydro projects, with plenty in the pipeline.

This is why it calls itself the UK’s “clean energy champion”.

But investors seem to want it to be lean as well as clean. SSE is still a bit too much of a hodge podge.

True, it has shed much of the podge, selling its retail division for £500m in 2019, its interest in energy from waste plants for £995m last year and its stake in Scotia Gas Networks for £1.2bn in August. Further disposals are planned, including stakes in its UK electricity networks to fund the group’s growth.

But even now it still has thermal energy, gas storage and business customers. And investors are applying a conglomerate discount to SSE’s valuation because of it. Bernstein analyst Deepa Venkateswaran argued in July that SSE’s renewables division was being undervalued by as much as half based on recent deal multiples. The break-up resistance knocked more than 5 per cent off the shares on Wednesday. 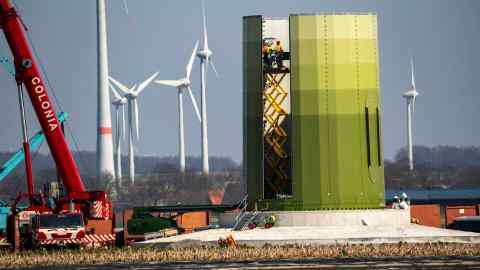 The targets for investment, earnings and growth set out by SSE are ambitious. It will invest an extra £1bn a year over the next five years, with more of that money going towards renewables. It aims to deliver a quarter of the UK’s 2030 offshore wind target and a fifth of the UK’s electricity networks investment. It will trim its dividend to free up cash.

But whatever SSE says, it is not clear why wind farms and regional electricity networks belong together long term.

The argument that scale gives access to funding that allows the group to do large projects it otherwise could not is unconvincing. Danish legacy energy group turned pure-play renewables powerhouse Orsted and Germany’s RWE, which are not integrated, still manage to deliver large projects.

It is hard to believe that a standalone renewables business would have difficulty securing funding on attractive terms in the current climate. Management’s estimate of separation costs of £200m and £95m a year in extra costs after a split merit a raised eyebrow too, even if GSK’s break-up is costing it £2.4bn.

Yes, wind is not a consistent source of energy. That hit Danish-listed Orsted and Vestas this year when the wind failed to blow. SSE was able to offset the impact thanks to its other businesses. But if investors are not rewarding it for its earnings diversity and would rate a standalone renewables business more highly, the case for it weakens.

The problem may lie in the fact SSE is very much a UK clean energy champion. Its expansion into international renewable power projects is in its early stages. Future projects include developments in Denmark and Japan, but the earliest of those does not start construction until 2024.

At that point, the significant capital demands of large overseas developments may merit a split. The renewables business will have matured and be more easily able to stand alone. SSE’s current plans take it to 2026. Even if there is no split now, it would not be surprising to have one by then.