The education secretary said ministers are looking at a ‘range of actions’ to help pupils catch up on missed schooling over the summer.

Speaking to Sky News this morning, Gavin Williamson said this could include lengthening the school day – but would not confirm any exact details.

‘We’re looking at a whole range of different actions, but what we want to do is give schools the extra resources they need to be able to take action immediately,’ he said.

‘Some of the reforms that we want to look at and consult on – we will look at the whole expanse of what we can do in terms of helping children have extra teaching time, have extra opportunities.

‘But this is an immediate response to give those children that extra boost.

‘But the support we can do is seeing children back into the classroom on March 8, which is I think something that all parents want to see, all children want to see and teachers want to see as well.’

When pushed he wouldn’t confirm the school day would definitely be extended – but said he was ‘looking at a broad range of different options’.

‘We will be looking at how we can boost and support children in a whole range of different manners – it’s not just about time in school, it’s about supporting teachers in terms of the quality of teaching and how we can help them,’ he added.

It comes after Boris Johnson revealed on Monday that pupils will be heading back to schools on March 8 as part of his roadmap to the end of lockdown in England.

The prime minister has this week pledged extra £400 million of funding – on top of the £300 million announced in January – as part of an education recovery plan following months of school closures during the coronavirus lockdowns.

Face-to-face summer lessons will be offered to children leaving primary school and all secondary pupils as part of the catch-up programme.

One-to-one and small group tutoring schemes will be expanded for those who need it most.

Education leaders called the package of measures ‘a promising start’, but warned recovery cannot happen in a single summer.

But the Labour Party claims the funding amounts to just 43p per day for each child.

Mr Williamson said: ‘Our package of measures will deliver vital support to the children and young people who need it most, making sure everyone has the same opportunity to fulfil their potential no matter their background.’ 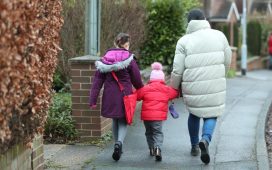