A “beautifully understated” rear extension by Proctor and Shaw has been named as London’s best new home improvement project at the 2020 Don’t Move, Improve! awards.

Soffit House is the overall winner of this year’s architecture contest, which New London Architecture (NLA) hosts annually to celebrate “the ingenuity of residential design” in the UK capital.

London-based studio Proctor and Shaw designed the winning double-height extension to slice through the existing dwelling in Lambeth, south London.

The scheme has provided the existing residence with additional living, dining and study spaces, and was praised by the judges for introducing more natural light inside via a large glass skylight.

It was also celebrated for its attention to detail, including the design of its level changes between the basement and garden levels and a warm oak soffit that marries the old and new structures.

“Soffit House is a wonderful example of how the space and light in a terraced house can be enhanced by good design,” said the jury, which was chaired by NLA founder Peter Murray.

“This simple addition transformed the sense of space and connected the areas of the house with each other and the garden. A beautifully understated and generous home.”

Don’t Move, Improve! 2020 was judged by a panel including the director of the London Festival of Architecture Tamsie Thomson, Tonkin Liu’s founder Anna Liu and director of Elliot Wood, Andy Downey. 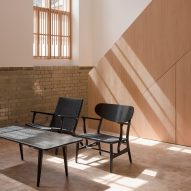 It was open to any home extension or improvement project completed in the last two years, in any one of London’s 33 boroughs.

Six other projects were also recognised in the awards, including 32 Laurier Road by Richard Keep Architects that was named as Urban Oasis of the Year.

The prize for Environmental Leadership was awarded to Three Rooms Under a New Roof by Ullmayer Sylvester Architects in recognition of its “refreshing approach” to a home renovation and use of timber.

Meanwhile, Oliver Leech Architects’ won Compact Design of the Year for Vestry Road, which was commended for its “careful and imaginative use of space” and how it “sympathetically worked with the existing building fabric”.

Disappearing Bathroom House by Manyu Architects, which took home the prize for Best Project under 75k, was also applauded for being “an excellent example of micro living”.

The Most Unique Character Award and the Materiality and Craftsmanship prize were awarded to White Rabbit House by Gundry + Ducker and Apartment Block by Coffey Architects respectively.

White Rabbit House was praised by the judges for its “bold and playful personality” and “the drama of the iconic and contemporary staircase” at its entrance.

Winners of Don’t Move, Improve! 2020 were selected from a shortlist of 25 projects, and revealed on February 11 2020 at The Building Centre in London.

Previous winners of the awards programme include The Chapel, a home created within the shell of a derelict religious building in Camberwell, and Sunken Bath Project, a garden room containing a sunken Japanese-style bath.

'Blackness is not a straitjacket on the imagination': the photography of Dawoud Bey

Putting men in the frame: images of a new masculinity

Your pictures: share your photos on the theme of ‘clash’

All about Andy: extracts from Warhol – A Life As Art