Paris is “jealous” of London’s cycle lanes and is copying London‘s green initiatives, according to London mayor Sadiq Khan.

Khan, who has been mayor of London since 2016, told Dezeen that he is aiming to make London “the greenest city in the world”.

According to Khan, London’s Ultra Low Emission Zone, tree-planting initiatives and cycle lanes are “the envy of the world”.

He believes that other cities, including Paris, where mayor Anne Hidalgo has been making headlines with a raft of sustainable initiatives, are copying his policies.

“So we’re doing lots of things rather than one or two excellent things that Anne’s doing,” he continued.

“We have the world’s first Ultra Low Emission Zone and we’re speaking to other cities across the globe, including Paris, about how we did it,” Khan said, referring to an area in central London where vehicles with high emissions are charged a daily fee.

In October, the zone is set to be expanded to cover around four million homes.

Hidalgo, who has been mayor of Paris since 2014, has recently announced plans to convert the iconic Champs-Élysées avenue into a pedestrian-friendly public space and plant “urban forests” in four of the city’s squares.

“I know Paris is jealous of our safe cycling”

Khan, who spoke to Dezeen at the opening of a brightly coloured zebra crossing designed by Yinka Ilori installed as part of a drive to attract people back into central London, explained that he is implementing a raft of green initiatives in London alongside the expansion of the Ultra Low Emission Zone.

“Put aside for a second the world’s first Ultra Low Emission Zone,” he said. “We’ve increased safe cycling fivefold, going from 50 kilometres to now more than 250 kilometres. I know Paris is jealous of our safe cycling.”

Last year, Hidalgo announced plans to plant 170,000 trees in Paris while by December 2020, London had 300 electric buses and Paris had 259. Both lagged behind Moscow, with 500 electric buses.

In terms of tree planting, Milan eclipses both cities with its Forestami initiative to plant three million trees.

Hidalgo, who is the first female mayor of Paris, introduced a Low Emission Zone in 2015 and is aiming to ban all diesel vehicles from the city from 2024 and petrol vehicles from 2030. 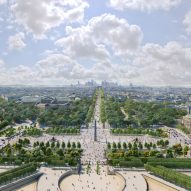 Champs-Élysées avenue in Paris to become “an extraordinary garden”

Earlier this month, Hidalgo announced that she will run for the French presidency. Khan was re-elected to a second term as London mayor earlier this year.

“I’m thinking long-term,” he said. “One of the challenges we have as politicians is we have a four-year cycle and we like to point to stuff within those two, three, four years that we’ve delivered. I’m in this for the long term. I want the city to be the greenest city in the world.”

“I’m quite clear that we face a climate emergency”

Khan set out his plans to make London a zero-carbon city by 2030 in the London Environment Strategy in 2018, the same year that London declared a climate emergency.

As part of this plan, the mayor’s office created its 1.5C Compatible Climate Action Plan, which was independently assessed by C40 Cities – a network of international cities that are aiming to address climate change.

“So the 1.5 degrees plan is my piece of work, but I asked others to mark my homework,” he said.

“So C40 Cities, which is a global network of cities across the globe, almost 100 cities, they looked at my 1.5 degrees plan and I was the first global city to get their sign off.”

C40 Cities is overseeing the Reinventing Cities competition, which will see developments that strive for net-zero carbon built in cities around the world including Paris but not London. 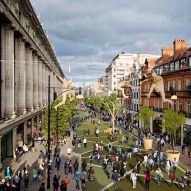 Khan became mayor in 2016 after now prime minister Boris Johnson left the role to become a member of parliament. While mayor, Johnson oversaw the 2012 Olympic Games and was responsible for introducing a public bicycle system and new London buses designed by Thomas Heatherwick.

He also pushed to build a pedestrian Garden Bridge over the Thames, which was also designed by Heatherwick. Soon after becoming mayor, Khan pulled the plug on the bridge, which had become controversial due to cost overruns.

“We are a city that has a responsibility to be a world leader,” said Khan. “I’m hoping people in London realise the progress we’ve made. We are the envy of the world.”

Keeping the memory alive: the race against time to save Australia’s archives – in pictures

‘We planted a seed’: the Afghan artists who painted for freedom

‘You can sense Selim the Grim’s anger’: portraits of Ottoman sultans go on show