The University of Oxford accepted record numbers of students from the most deprived areas of the UK last year, although young people from some regional “cold spots” remain under-represented.

The number of undergraduates from black, Asian and minority ethnic backgrounds admitted to the university also reached a record high last year, though black students are still under-represented on certain courses and in certain colleges.

One in six (15.9 per cent) students admitted to Oxford last year were from the most socio-economically disadvantaged areas, up from 12.2 per cent the previous year.

Following last year’s A-level results fiasco, when several A-level students missed their grades under Ofqual’s algorithm after exams were cancelled, Oxford admitted 300 more students than usual and a record number of state school students, with such admissions totalling 68.6 per cent.

Dr Samina Khan, director of undergraduate admissions and outreach at the University of Oxford, said: “The pandemic will continue to hit the least advantaged students for a while, hence we remain resolute in stamping out inequality in access to Oxford.

“Working together with schools across the country, we are increasing our focus on reaching regional ‘cold-spots’ where the most talented young people are still under-represented at Oxford – driving down the risk that we are missing out on some of the UK’s brightest students.”

The university’s Undergraduate Admissions Report also showed that 23.6 per cent of UK undergraduates admitted to Oxford in 2020 were from black, Asian and minority ethnic backgrounds, although some black students were disproportionately under-represented on certain courses.

The number of black students admitted last year grew to 3.7 per cent from 3.2 per cent but, between 2018-2020, there were five or fewer black UK-domiciled students on 13 of Oxford’s largest courses, the figures show.

Over the three years, one UK black student was admitted to biology, one for geography, three for physics and four for history and politics, according to the university’s annual admissions report.

In five of Oxford’s colleges – Lincoln, Merton, St Hilda’s, Queen’s and Trinity – just five or fewer UK black students were recruited over the same period, which is lower than the previous year.

Geoff Barton, general secretary of the Association of School and College Leaders (ASCL), said it would take a “society-wide effort to improve the life chances of all children and young people”.

He said: “We are very pleased to see the progress that the University of Oxford is making on improving representation of disadvantaged students in its intake.

“However, there is clearly still more work to be done, and it is very worrying to see the under-representation of students from the north of England.

“This isn’t just a matter for Oxford and other universities. It requires a society-wide effort to improve the life chances of all children and young people through joined-up and transformative social and educational policies.”

‘I thought I would never make it’: groundbreaking grads on their success 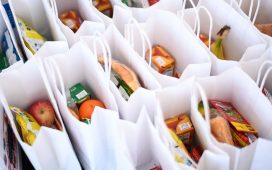