Almost 30 per cent of shareholders in Ocado voted against the company’s remuneration policy amid controversy over an incentive scheme that could pay out tens of millions of pounds to senior executives.

The company said in a statement on Wednesday afternoon that its pay policy was opposed by 29 per cent of those voting. A similar proportion voted against extending the group’s “value creation plan”, a bonus scheme that currently pays out 2.75 per cent of any shareholder value over a certain hurdle to executive directors and other senior managers.

The level of opposition is up slightly from 2019, the last time Ocado’s pay policy was subject to a binding vote, when just under 25 per cent voted against.

However, the plan was nevertheless approved and there was relatively little opposition to the re-election of Andy Harrison, chair of the remuneration committee.

Ocado’s remuneration committee was seeking approval for a three-year extension to the bonus scheme, from 2024 to 2027, an increase in the size of the pool to 3.25 per cent, and other technical changes.

Under the plan, Ocado chief executive Tim Steiner could in theory receive up to £20mn a year, or a maximum of £100mn across five years.

Ocado’s directors said they understood the concerns of some shareholders about “the non-standard nature” of the plan but continued to believe the changes “offer the best way to drive exceptional and sustainable growth, whilst also rewarding short-term operational and strategic decisions”.

ISS said it was concerned about the high quantum of the value creation plan and its complex structure, which “carries a more costly administrative burden for the company compared to typical incentive arrangements”.

Glass Lewis said it was worried about the “potential for excessive payouts” in both proposals.

But ahead of Wednesday’s meeting, one top-10 investor in Ocado said that, while he was “lukewarm” about the “unusual remuneration scheme”, he would vote in favour of it.

“Ocado is competing for talent with US tech companies and needs to recruit people who are used to significant stock-based compensation,” the shareholder added.

“The share price is down a lot so return hurdles are a challenge.”

Shares in the online group surged during the Covid-19 crisis as demand for grocery delivery increased, but they have more than halved from their peak as pre-pandemic shopping habits returned. 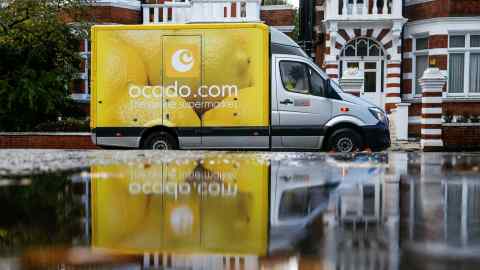 The shareholder added that Ocado made “an important contribution to sustainability” because its Solutions business, which licenses its distribution centre technology to other food retailers, helped cut the carbon cost of running hundreds of large supermarkets.

“The remuneration scheme should incentivise management to continue to sign deals to distribute its technology and drive change in the sector . . . ecommerce is more sustainable than people going to the shops.”

Royal London Asset Management, which holds a 0.3 per cent stake in Ocado worth about £21mn, said on Tuesday that it had voted against the grocer’s pay policy.

Sophie Johnson, corporate governance manager at the £159bn asset manager, said she had “serious concerns” over the value creation plan.

“This is another example of how poorly designed incentive plans can lead to excessive awards for management . . . we would have preferred a more balanced long-term incentive plan with a range of measures looking at different aspects of performance and the overall health of the business.”

Ocado said it had extensively consulted with its top shareholders, which it said understood the rationale behind the incentive plan and indicated their support for it.

The company is no stranger to controversy over pay. In 2020, Steiner and other executives shared £87mn after an incentive scheme devised in 2014 paid out in full. The value creation plan has caps on individual payouts to prevent such bumper paydays.

Similar schemes based on share prices or market value at other retailers have also attracted scrutiny. Online fashion retailer Boohoo could pay out tens of millions of pounds in shares to executives if its share price exceeds certain levels. The schemes did not require shareholder approval because the company’s shares trade on Aim.

New Frasers chief executive Michael Murray could receive £100mn in stock if the group’s share price exceeds £15 for 30 consecutive days before October 2025. Investors will vote on the package this year.

Where did all those US sweet shops come from? The problem is, we don’t know | Adam Hug