New Look is seeking steep cuts to its rents by switching to sales-linked leases, as the high street fashion chain battles to outride the pandemic-related downturn and save over 10,000 jobs.

The UK retailer has taken the unusual step of asking landlords to switch 402 of its stores to a turnover-based rent, as part of a new restructuring in which it is also seeking to pay zero rent for three years on 68 stores.

Rents based on sales have been used by other fashion retailers but this would be the first time a store estate of this size had been switched to turnover rents in the UK.

“We have gone on for far too long with rents that only ever go up,” said chief executive Nigel Oddy on Wednesday. “Landlords have not seen the downside that we have.”

He said that while the move would have a “sizeable impact” on the group’s cost base, it was justified because landlords would share in any upside and because the group’s omnichannel strategy would help drive footfall to retail locations. New Look customers make more than 3m click-and-collect orders each year.

“We’ve put in a strategy that we believe is absolutely right — broad appeal fashion and true omnichannel,” said Mr Oddy. “We firmly believe that bricks and mortar has a place in that.”

The group’s heritage is in market towns and 95 per cent of the UK population is within 10 to 15 minutes of a store. The approach contrasts with that of operators such as Zara, which has fewer than 70 stores and relies on ecommerce to drive sales outside those locations.

New Look said the percentage of turnover paid as rent varied up to a maximum of 12 per cent and that property owners would be able to break leases at any point over the next three years if they identified an alternative tenant.

It is not looking to close any stores as a result of the company voluntary agreement, having closed more than 60 outlets under a previous CVA launched in 2018.

Turnover rents, already widely used in travel retail and outlet villages, have grown in popularity as a result of Covid-19 as retailers look to better align their property costs with sales levels.

Sports Direct and Hennes & Mauritz are among the major retailers that have been pushing landlords to accept them. They also featured in CVA proposals from All Saints and stationery group Paperchase, though in those cases they affected fewer than 80 stores. 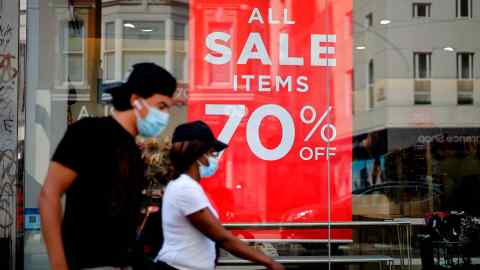 Some landlords remain hesitant, however, saying that retailers are reluctant to provide the transparency required.

“They have certainly been listening,” said one landlord of the New Look proposals. “But this is not being driven by the properties being over-rented — it’s because the senior lenders are being haircutted and they want to see some pain-sharing among other creditors.”

“CVAs should not be about permanently ripping up leases,” said BPF chief executive Melanie Leech. “Property owners are increasingly supporting turnover-based rent models underpinned by collaboration and transparency, but CVAs should not become a mechanism to enforce this.”

New Look announced a debt-for-equity refinancing two weeks ago, which is conditional on the CVA being approved at a creditor vote on September 15. If it is not, the company is likely to fall into administration, putting more than 11,000 jobs at risk.

Mr Oddy said the refinancing — also the second such exercise in recent years — had received the requisite level of support from bank lenders and holders of its bonds, which stand to incur substantial losses as a result.

He also expressed hope that lower debt and better lease terms would facilitate an improved credit rating and the reinstatement of trade credit insurance, which would allow suppliers to offer better payment terms.

Boots slashed the price of morning-after pills on Black Friday. Why not every day? | Rose Stokes