Wm Morrison plans to cut 3,000 managerial positions in its stores across the UK as part of a staffing revamp that will see it boost numbers of lower-level roles amid increasing pressure on established supermarkets.

The Bradford-based supermarket chain said on Thursday it was changing the way stores were staffed and would create 7,000 new in-store “customer service positions” — or 4,000 on a net basis — as managers were either demoted or left the company.

“Whilst there will be a short period of uncertainty for some managers affected by these proposals we will be supporting them through this process and there are jobs available for everybody who wants to continue to work at Morrisons.”

The company said it was opening a period of consultation, with managers given a choice as to whether to depart or take up the lower-level roles, many of which will be on its in store counters, in positions such as butchers, bakers and fishmongers.

The move comes as Morrisons — along with other establishment supermarkets — struggled over the Christmas period and faces rising pressure from customers shifting to discounters such as Lidl and Aldi.

Morrisons sales fell 1.7 per cent in the second half of 2019, with house broker Shore Capital estimating a 2.5 per cent dip over the Christmas period, as retailers faced difficult festive trading.

Industry data from Nielsen released earlier this month indicated grocery sales generally had grown just 0.5 per cent over the four weeks leading up to Christmas — the slowest pace in five years.

Nielsen’s figures showed all the major chains losing market share and sales, while Co-op, Iceland, Marks and Spencer and the German discounters, Aldi and Lidl, increased sales. Lidl was the top performer, lifting sales 12.2 per cent against the same period a year ago. 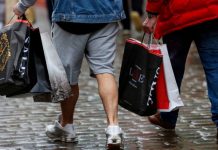