JD Sports forecast that profit for the year ahead would exceed pre-pandemic levels, as the retailer resumed dividend payments, hailing a particularly strong performance from its US operations.

The chain was among the most popular among shoppers as non-essential shops in England and Wales opened this week. “I’ve seen the takings figures and they were strong,” said Peter Cowgill, executive chair.

For the year to January 2022, the company said it anticipated pre-tax profit before exceptional items to be “in the range of £475m to £500m” compared with a previous forecast of £440m-£450m.

About £15m of the increase is due to the acquisition of DTLR in the US with the remainder down to organic growth.

“What’s really assuring is what JD means as a retailer,” added Cowgill. “We’re right up there with the likes of Primark and Zara.”

For the year to January 2021, sales reached £6.17bn, a slight increase on the previous year. Pre-tax profit was £421m, in line with its most recent forecast of “at least £400m” and not far below the £438m reported for the year before the pandemic struck.

The figure strips out exceptional items, which included a £20m charge for restructuring its outdoors business and a £55m impairment against Footasylum.

Cowgill said this reflected the trend towards direct-to-consumer sales at major sportswear brands, rather than the protracted regulatory process around the acquisition.

The Finish Line and JD businesses in the US reported revenue of £1.7bn and profits of £156m, helped by federal stimulus programmes, relatively fewer store shutdowns and better transfer of custom online when shops were closed.

“Trading in the US has been very strong indeed,” Cowgill said, adding that the company had already benefited from the Joe Biden administration’s $1.9tn stimulus programme, which included direct payments to all US households below a certain income level.

The acquisitions of Shoe Palace and DTLR have added more than 400 stores to an existing US estate of about 550 acquired with the 2018 purchase of Finish Line. 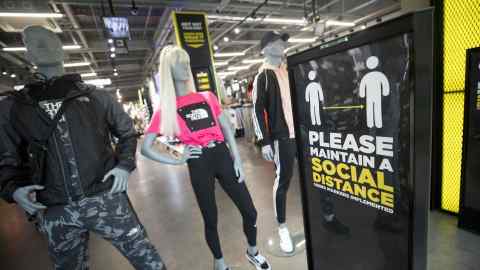 JD will pay a final dividend of 1.44p a share, totalling £14.8m. But it has not offered to return any of the UK government’s coronavirus-related assistance — including about £38m of rates relief, according to Altus Group — despite finishing the year with almost £800m of net cash.

“Without getting the soapbox out, we feel slightly bitter about store closures,” said Cowgill.

“There are retailers who were allowed to stay open who haven’t paid [business rates relief] back, and there were retailers allowed to continue selling clothing and footwear while we had to shut,” he said.

Furlough cash had “done what it was intended to do, in saving thousands of jobs”.

The company raised a further £464m in a share issue after the period end, although acquisitions and the payment of deferred rent and other expenses will eat up about £500m.

Cowgill said it had reached settlements with most of its landlords relating to rents due for periods of enforced store closures. “We’ve achieved 50/50 [split] or slightly better,” he said. Ongoing rents were being renegotiated as leases expired.

Shares in the group were almost 3 per cent higher in early afternoon trade on Tuesday, having set new all-time highs in recent days.

Readers give their verdict on AO.com’s customer service

Safety in Bangladesh clothing factories is being taken seriously | Letter