‘It can’t be ignored’: Osman Yousefzada on his gigantic artwork


Approaching Birmingham New Street station on the train, you’ll normally spot the scaly curves of Selfridges’ landmark Future Systems-designed building nestling in the cityscape. But right now, rising into the summer sky in its place, is a bright pink and black structure. Startling, cheering and entirely unmissable, Infinity Pattern 1 is a giant installation by the multidisciplinary artist Osman Yousefzada. He was formerly best known as a fashion designer, whose beautifully tailored and elegantly architectural pieces have been worn by Beyoncé, Lady Gaga and Taylor Swift. Now the 44-year-old has tailored a distinctive look for the Selfridges store, said to be the height of three jumbo jets, surrounding the building during a year of restoration.

Infinity Pattern 1 is Yousefzada’s first piece of public art, selected by Birmingham’s Ikon Gallery from an international shortlist. “You can read it clearly from a long way away and that was something we considered when we were selecting,” says Jonathan Watkins, Ikon’s director. “We wanted it to ring out from afar. The fact that Osman comes from Birmingham, but is so cosmopolitan and such a Renaissance man, it’s wonderful that he was the one who won.”

For Yousefzada it is an opportunity to make a meaningful statement in the centre of his home town. The star-like tessellating patterns that cover the building represent for him ideas of connectivity and new possibility. “The infinity pattern is a space without borders. You have that idea in mosques, in Islamic tiles, in churches where the arches feel like they’re never ending. It’s hopeful.”

Its bright colour represents the idea of “the colourful east” – he puts this phrase in air quotes. “Or the ‘colourful’ Asians or Africans who come to fortress Europe. For me, it is associated predominantly with the migrants who bring that narrative right into the middle of the city. It’s a way for me to put them at the centre, in one of the most diverse cities in the UK.”

Although he lives in London now, Yousefzada returns to Birmingham often, helping to take care of his elderly mother. He was born and raised two miles away from Selfridges in Balsall Heath, in a strict Muslim household and close-knit, working-class Pashtun community. He was well into his teens by the time he travelled the short distance to the city centre.

I wanted to bring that idea of agitators – our tongues are weapons, we sleep with snakes, we’ve got claws!

His Afghan-Pakistani parents, a carpenter and a dressmaker, both unable to read or write, immigrated to Birmingham in the 60s and 70s (his mother followed his father seven years after he arrived, when they could afford for her to travel). One of five children, his sisters were prevented from going to school once they hit puberty and Yousefzada was forbidden to draw. He was able to read non-religious books in his bedroom only because his parents didn’t know what they were.

His is a pretty mind-blowing personal story about the reality of immigration, race and poverty in Britain over the last few decades – one whose importance has been spotted by Canongate, which will publish his memoir, The Go-Between: A Portrait of Growing Up Between Different Worlds, next year. It’s a beautifully observed and funny book about life in an almost segregated community, albeit one that was situated in the middle of a red-light district.

His work as an artist is his attempt to understand and relay the trauma of global immigration. “It’s by sheer will that you transplant yourself to the other side of the world with no skills, no education,” he says. “Like most migrant communities, you have an identity and a sense of belonging and you go somewhere and you have to navigate what that sense of belonging is. If you’ve got enough people around you can do that as a community and get through that phase. But you’re taking a massive gamble. It’s pioneering, especially if you can’t read or write.”

The installation isn’t quite complete as we walk around its exterior. It towers above the steeple and Victorian edifice of St Martin’s church. We take a brief diversion into the busy covered market where Yousefzada used to buy fabric from the stalls for his mum, who taught him how to tailor. Then we take the No 50 bus, five minutes up the road to Balsall Heath, so he can show me the neighbourhood.

“Not many people living in Balsall Heath go on to dress Beyoncé,” Watkins says. “A lot of people who live there never leave. Osman’s is an extraordinary story of creative ambition.” The neglected Victorian terraces are surrounded by the former workshops and small factories that originally brought immigrants to this part of the country.

“It’s about 90% Muslim here. You don’t see a lot of white faces,” says Yousefzada, as we walk towards the chai houses and restaurants on Ladypool Road. “It’s a real closed world. It’s got more violent [since he was growing up there] because there are no opportunities. There are a lot of drugs. It used to be more mixed, but all of the African-Caribbean community has left now. With regard to poverty in this country, if you look at the statistics, the Bangladeshi and the Pakistani communities are the worst off.”

We have lunch in Chaiwala, about two minutes’ walk from his family home. Between bites of chilli paneer and masala chips, he says, “For me, class is a big thing. If you come from a peasant background you have this idea of knowing your place. That trauma or that idea of wanting to assimilate is passed on to the next generation.”

The usual pattern with families of illiterate immigrants, he says, is that their children will get better jobs than their parents. “Then their children might go to university and become bankers or accountants or lawyers or doctors and then the next generation might have the option to be creative, because their parents might allow that luxury to happen.” Yousefzada skipped two generations – studying anthropology at Soas in London in the 1990s, fashion at Central Saint Martins and an MPhil at Cambridge University, before setting up his own label in 2008. “I don’t want to make out I’m exceptional by that, but if I do have a platform I want to be able to have a wider conversation.”

He finds it easier to have that conversation through art now, rather than fashion. “My work is ethnographic but it’s not a middle-class idea about creativity, or an indulgence,” he says. “It stems from my lived experience.” His first solo show Being Somewhere Else at Ikon in 2018 explored the links between fashion and migration. His presentation at London fashion week in 2020 was a film about Bangladeshi garment makers (“Osman opts for artsy film instead of fashion collection” announced Women’s Wear Daily rather sneerily). He hasn’t rejected the industry entirely and is still designing clothes, but he calls himself a garment-maker now. “It’s more democratic as you’re on the same level as the rest of the team.”

As a brown face in a predominantly white fashion industry, it wasn’t easy running his own label for more than a decade. He has spoken out about racism in the industry and has observed the change since the Black Lives Matter movement. “Individual stories have started coming to the forefront, but that wasn’t the case when I was around. Fashion doesn’t have a conscience in a sense,” he says. “If you’re brown or black as a newcomer you’re currently getting a lot of support, but if you were breaking ceilings before, the industry has to face its demons and deal with guilt over that and it’s not interested.”

Next month, as Yousefzada’s work looms large outside the store, inside Selfridges will hold an exhibition, Migrant, also curated by Ikon gallery and featuring, alongside other artists, some of Yousefzada’s smaller-scale pieces: silk screen prints superimposed with allegorical figures that he refers to as “non-compliant brown bodies”, resisting the idea of “the good immigrant”. Inspired by Indian or Persian miniatures and religious iconography, they are insubordinate figures, sticking out tongues or holding a phallus. “The south Asian narrative is so often that we’re not seen as agitators, but wealth accumulators – the model minority.” he says. “I wanted to bring that idea of power to the work – our tongues are weapons, we sleep with snakes, we’ve got claws.”

For the moment, it’s his giant installation attracting all the attention. “The idea of the large scale is very appealing at the moment. I don’t know if it’s about ego,” – he laughs – “but it’s about making something that can’t be ignored. Whether people like it or not, it’s there.”

‘Privacy is at stake’: what would you do if you controlled your own data? 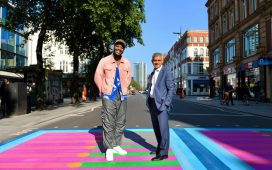 Forced from home: the humans and animals under threat – in pictures