NEWSCABAL
Home » Halls of power: how the White House inspired a homely renovation in upstate New York
arts and design

Halls of power: how the White House inspired a homely renovation in upstate New York


The White House doesn’t often provide interior design inspiration – remember Melania Trump’s 2018 Christmas decorations? – but Tyler Lory and Michael Rauschenberg’s grey-painted clapboard home in New York state’s Hudson Valley reflects 1600 Pennsylvania Avenue in one specific way. “As a kid I was always impressed by the rooms at the White House: the blue room, the red room, the green room,” says Lory. “I wanted our rooms to each have their own identity.”

Here, the mono effect is achieved with a different mood and richly patterned wallpaper for each room. Papers are layered with atmospheric portraits and rooms are full of antiques gathered over a lifetime.

The dining room features an intricate, lace-like pattern providing a delicate backdrop to the couple’s collection of silverware and crystal. Upstairs, four rooms were conceived as “jewel boxes”: a moody, study is papered with exotic blooms against a dark background; a blue bedroom has a menagerie of birds on a powder-blue background; a yellow room is more traditional, with pink florals against a buttery background; while the couple’s own black-and-white room is boldly monochrome throughout.

The effect is cocooning and intimate. Lory’s friends call his decorating style romantic: “I think that’s a fair statement of what we’ve done. I want people to feel special – like somebody fussed over them.” Gilt, glass and silver accessories bounce light around the rooms, which are all immaculately dressed, pillows plumped ready for the next houseful of visitors. You can practically smell the polish and coffee.

The house is also inspired by their friend Jim, a close friend who lived in a grand, convivial house in Chicago full of pattern, porcelain and portraiture. Jim died of Aids in 1989 at the age of 33, and the Red Hook home is, in part, a homage to their friendship.

Lory and Rauschenberg’s 1920s kit house is on the crest of a hill in Red Hook, about two hours north of New York City. From the front porch you can see the Catskills. “That’s what helped me decide on the house,” Lory recalls. “It was a dump. But as soon as I walked outside and looked across the way, I saw the mountains and all the colours that come with them.”

The couple have spent 17 years restoring what was a dilapidated, partially prefabricated house with four boxy rooms on each level. It was haphazardly extended 50 years later. “When we bought the house, it looked right out of 1973,” says Lory. “I can say that because I was born in 1956, so I was around in the early 70s.”

Red Hook is in historic Dutchess County; for Lory – a barrister who spends the week in New York City – this was also part of the attraction. Franklin D Roosevelt’s family home is here; his Presidential Library is in nearby Hyde Park; Bard College – the private liberal arts college the couple’s adopted son attends – is 10 minutes away.

Lory sourced all the wallpapers from Thibaut, America’s oldest wallpaper specialists. He recalls ordering more than 70 samples (large-scale sheets, rather than stingy swatches) before settling on a combination of colours and patterns. The decision-making process was instinctive – “so much of decorating is about emotions and feeling” – but his first and only rule for purchasing paper is simple: “You have to like it.” Try not to be swayed by the latest collections or colourways. Order samples of what you are naturally drawn to and edit them down until you are left with something you can live with.

Lory grew up in a heavily wallpapered house, and recalls the pattern continuing on the inside of each built-in closet. He has replicated that here, which guests find intriguing. “It causes a reaction,” he says. “Aside from choosing something you like, I think it ought to be interesting – something to talk about.”

This edict also applied to Lory’s choice of artwork, most of which was sourced from an estate sale in Palm Springs. In the living room, a portrait of a society woman in a cloche hat oversees proceedings. (The artist is Alexander James, nephew of novelist Henry James.) In the dining room, a man with a clipped moustache guards the silverware. “Of course these people aren’t our actual ancestors, but they watch over us,” says Lory. “We talk about them and create stories for them. They belong in our family, somehow.”

The furniture here “has happened over time” and includes inherited pieces and things from local antique shops. Lory’s favourite is the mahogany dining table, which expands to seat up to 12 and is surrounded by reproduction Duncan Phyfe chairs that once belonged to his grandmother and have travelled with him since the mid-80s. For the pair’s own bedroom, Lory covered a tattered $200 chaise longue in monochrome toile. Set against the larger-scale florals of the wallpaper and anchored by a brooding portrait above, it creates a focal point in an otherwise underused space.

This instinctive layering of patterns and paintings has been, Lory says, “a labour of love”. Imbued with memories of his friend Jim, and his own childhood home, Lory has created a home that is – above all – welcoming. “I want the place to be cosy for people,” he says. “I want it to be an inclusive place which, for gay men, has not always been the case … I wanted to create a space that felt really welcoming to all.”

‘A very Adelaide thing to do’: who is behind the city’s googly eyes wave? 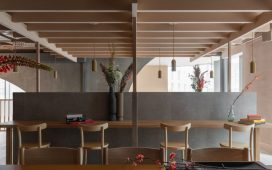