Coronavirus: Labour calls for government to delay university term as thousands of students caught up in lockdowns

The government has been urged to stop students arriving at universities amid fears teenagers across the UK will be “locked in their rooms”  as coronavirus outbreaks force thousands to self-isolate.

The call came after thousands of students in Glasgow, Manchester and Edinburgh were ordered to self-isolate following outbreaks linked to freshers’ week, with some accusing their university of “false imprisonment”.

Manchester Metropolitan University conceded on Sunday it was unable to prevent students leaving their accommodation after human rights lawyers questioned the legality of a lockdown enforced by security staff.

Professor Malcolm Press, vice-chancellor of the university, said he trusted up to 1,700 students confined to Birley campus or Cambridge Halls would “do the right thing” and abide by government guidelines on self-isolation.

He claimed it would be “unfair for students” if the new academic year was delayed or cancelled, adding: “The government places a high priority on universities staying open and delivering high quality education.”

She also called on the education secretary to promise that students would not be prevented from travelling home for Christmas.

“Universities have done all they can to prepare for students’ safe return, but the government has failed to play its part,” Ms Green said in a letter to Gavin Williamson. “You let young people down with the exam fiasco over the summer and now many of those same students are being let down again. These young people deserve better than your incompetence.”

Ms Green added: “It is unthinkable that students will be locked in their rooms and unable to return home to spend Christmas with their families. The government must promise that this will not happen, and work with universities to enable every student to access tests so that they can travel home safely.

“”The government should also consider a delay to the start of term or a pause in migration for universities where term has not yet begun to allow improvements in testing capacity and remote learning provision.

“Gavin Williamson must urgently come to parliament and set out how he will resolve the critical situation in our universities that is causing such anxiety for families across the country.”

Shadow justice secretary David Lammy also called on the government to fix its “pathetic” test and trace programme to allow students to return home for Christmas.

He added: “Students have been done over on their A-Levels, they’ve been done over on freshers’ week, the government’s now threatening to lock them up at university. We want young people home with their families at Christmas time and they need the testing to make sure that that can happen. ”

Union leaders said their warnings to managers at Manchester Metropolitan University “went unheeded” before the outbreak of coronavirus among at least 127 students prompted the city council to impose the lockdown on Friday night.

Hours later, as students put up posters criticising Boris Johnson and compared their halls of residence to a prison, human rights lawyers questioned whether local authorities and universities had the legal authority to lock students in their rooms.

See also  I had special needs support in school. Many pupils today are not so lucky | Gerry Hart

A Liverpool-based firm offered their services “pro bono” to challenge the decision, amid claims the restrictions could amount to false imprisonment.

Students said they were left “scared and confused” after police turned up at the gates and security guards refused to let them leave to buy food.

The university has since pledged support for all the residents staying in the affected halls including food deliveries from Asda.

Meanwhile university bosses in Glasgow and Edinburgh faced criticism for banning students from returning home or visiting pubs and restaurants following a cluster of cases.

It prompted the Scottish government to issue updated guidance allowing students to “change household” and return home from study accommodation.

Higher education minister Richard Lochhead said: “We know that many students may be struggling with the prospect of not being able to return home to visit family and other support networks, especially if is the first time in their life they have been away from home.

“Knowing what to consider in deciding whether to return home will help support wellbeing and enable students to make informed choices, but it is important to stress that adjusting to life away from home is always challenging.”

The government has rejected calls to delay the return of students to university after unions described the situation as “shambolic”.

Culture secretary Oliver Dowden accepted that said the start of the autumn term was “not as it would be” due to the crisis but said that students should still pay tuition fees as they were being taught.

See also  UK coronavirus live: minister insists there is 'no confusion' over A-level grades in England

He also insisted that students had “clear guidelines to follow” as he told BBC’s Andrew Marr Show: “Young people have paid a huge price during this crisis and I think it is only fair to try and get them back.”

A Department for Education spokeswoman said: “The government is working closely with universities to ensure they are well prepared for the return of students, and we have published guidance to help them keep students and staff as safe as possible. 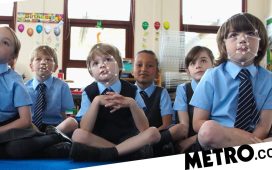