Record-breaking temperatures this summer have pushed up energy demand for cooling and hit electricity generation from nuclear, hydro and coal sources at a time when Europe is seeking to cut its reliance on Russian gas.

“The hope was that summer would provide some release for the European energy market,” said Fabian Ronningen, analyst at Rystad, a consultancy. “But this heatwave will add to the crisis further down the line and it looks bad for winter. It’s close to our worst-case scenario.”

Extremely high temperatures, which have fuelled wildfires in Spain, Portugal, France and elsewhere, have been recorded across the continent while the UK Met Office issued its first “red warning” for extreme heat.

That has helped to push up demand for energy as consumers turn on air conditioners, capped nuclear power generation in France and Switzerland because river water has become too hot, and lowered hydro output due to droughts.

The disruption to electricity supply caused by the heatwaves — which are becoming more common and intense due to climate change, scientists say — has stoked the record-breaking rally for power prices in parts of Europe even as gas prices have eased off in recent days.

Power for delivery the next day in France surged 23 per cent to an all-time high of €640 per megawatt hour on Tuesday, as the heatwave exacerbated problems for the country’s nuclear fleet beleaguered by maintenance issues. Prior to last winter, prices rarely exceeded €100 per MW/h.

The French regulator has waived requirements this month at four plants run by EDF — which the state is moving to fully nationalise — “to ensure the safety of the electricity network” and allow plants to keep operating.

“It’s very unusual to raise these limits,” and the move showed “how desperate” the French authorities are, said Reinhard Uhrig from Friends of the Earth Austria.

As a result, France, usually Europe’s biggest power exporter, is importing electricity from the UK and other nations including Spain to plug the gap.

William Peck, EU power market analyst at ICIS, an energy analytics group, said wholesale electricity prices in France and Germany were on course to hit their highest weekly and monthly levels since market liberalisation in the late 1990s, even after adjusting for inflation.

Elsewhere, high temperatures and low rainfall in Germany have reduced the river Rhine to its lowest July level in more than a decade. This has restricted the supply of coal to power plants and threatens a repeat of the 2018 drought that disrupted shipping and hit the country’s economy.

Uwe Kiwitt, a ship’s captain who transports fuel to sites along the Rhine, said the heatwave had complicated his deliveries.

“As water levels fall, calculating the amount that can be transported becomes increasingly difficult,” said the employee of HGK Shipping, an inland shipping company. “Every tonne that we can take with us counts.”

The extra pressures on the energy network add to the challenge for Europe to fill its gas storage before winter, as uncertainty hangs over whether Russia will resume flows along the Nord Stream 1 pipeline to Germany that have been suspended.

France’s hydropower output was 2.3 gigawatts on Sunday, compared with a same-day average of 4.1GW over the past seven years, according to RTE, France’s transmission operator. 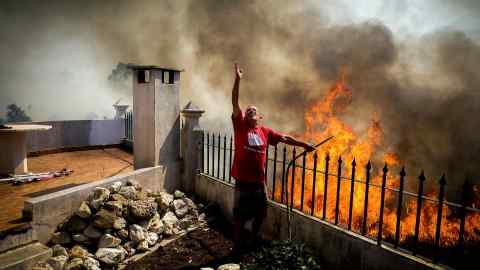 Europe is not alone in facing hot weather that has put pressure on energy supplies. Heatwaves in China have led to more coal being burnt by power plants, boosting already all-time record prices. The US is set to use high levels of gas power generation to stay cool during a heatwave afflicting Texas and other states, according to forecasts by S&P Global Commodity Insights.

While hot weather is a problem for Europe now, energy sector executives are pinning their hopes on mild weather over winter to help keep demand in check.

“The weather is going to be more important than anything else this winter,” said Marco Alverà, former chief executive of Snam, the Italian gas pipeline operator. “We have to really keep our fingers crossed that it’s a warm winter.”