NEWSCABAL > retail > And then there was one: the last resident of Bond Street
retail

And then there was one: the last resident of Bond Street


From his vantage point at the oriel windows of his Bond Street flat, Ollie Claridge has an unrivalled view of the super-rich going about their business. In London’s most opulent shopping street, where a billion pounds is spent each year, this might involve choosing a £5,000 handbag, trying on a £3m diamond ring, bidding at auction for a Mercury Cougar used in a James Bond movie or sipping pink champagne mid-morning as flawless shop assistants flutter around.

Claridge is a part of this world and apart from it. “I’m a bit of an anomaly,” he says. “Lowering the tone.”

Courtesy of a protected lease inherited from his father, Claridge is the last resident of Bond Street, alone among the window displays of brands such as Dior, Cartier and Asprey. “It is a bit lonely, particularly in the last year. There’s no community. There are pubs to the west of Bond Street, but they’re pubs for workers,” he told the Observer.

A garden designer – “seasonal work, very much hand to mouth” – who was brought up in a Scottish village, Claridge is both bemused and amused at the world literally on his doorstep. “At the end of the most recent lockdown, there were queues of people outside Tiffany. I mean, they’ve got all this money but they still had to queue on the street.

“None of these international brands make any money from these shops because the rents are so enormous. But they absolutely have to have a Bond Street address.”

In 2019, Bond Street, running between Oxford Street and Piccadilly, was the most expensive street in Europe for retail rentals, and the third most expensive in the world after Hong Kong’s Causeway Bay and New York’s Upper Fifth Avenue.

The premium was “due to its global renown among luxury retailers, who perceive representation here, alongside other locations in New York, Paris and Tokyo,… as key to success”, Peter Mace of property consultancy firm Cushman & Wakefield told Retail Gazette.

A television documentary, Billion Pound Bond Street, to be shown on ITV on 10 June, provides a behind-the-scenes glimpse into this world of “fabulous bling and aspirational luxury”, according to Bafta-winning director Michael Waldman.

“I was delighted to find the street’s only resident, a man who is not exactly a fish out of water, because he actually belongs rather fabulously in terms of the history and characters of the area, but who is a maverick in this world of brands. He doesn’t share the desire [for luxury] but he’s not outraged by it, he simply says, ‘isn’t it strange?’,” Waldman told the Observer.

Claridge moved into the flat – once inhabited by the Guy Burgess of the infamous Cambridge spy ring – 20 years ago, and inherited the lease in 2006 when his father died. “We used to have neighbours, but not any more.” The astronomical cost of Bond Street property has excluded all but commercial lets to high-end businesses, he says.

Nelson, Handel and Jimi Hendrix were among historic residents of the area’s architectural splendours – along with London’s highest-paid sex workers. “There was a red-light district right around the corner. Bond St was once rough at the edges, but not any more. I wish it was a bit rougher,” says Claridge.

But, he adds, there are “quite a few” homeless people. “A lot of people who work in the area regularly gave them money but, during lockdown, their income went because there was no one here.” Gangs were also “shoving people off their spots”, he says.

Despite growing inequalities, with the wealth of the super-rich estimated to have increased by 25% during the pandemic, Claridge is not judgmental about people splurging thousands of pounds on fashion brands, or hundreds of thousands on luxury cars, or even millions on diamonds. “Other people’s morals are their business. But there is an ethical question of how much tax some of these companies are paying because a lot of them are registered in Switzerland. People should pay taxes, but they’re clever at not doing so. If you’re rich enough to spend £4,000 on a handbag, you’ve probably got a very good accountant.”

Inequality and poverty are “not OK”, he said. “You don’t see much of it from Bond Street. Within a few miles, there are children who don’t have enough to eat.”

He knows Boris Johnson “vaguely” through his old friend, the prime minister’s sister, Rachel, he says. “Boris came down Bond Street a few years ago, and he recognised me, and said ‘Ollie, can I count on your vote?’. I said, ‘has no one ever told you you’re a Tory?’. He laughed – he had a sense of humour then, which might have slipped a bit.”

Claridge, who spent last week on a retreat in Dorset, hasn’t seen Waldman’s documentary and says he probably won’t watch it when it’s aired. The lease on his flat has another six years to run, but he doesn’t know where he will go when it comes to an end. “I can’t afford to live anywhere else,” he says.

If he had some of the wealth he sees being splashed around in Bond Street, what would he do with it? “I’d buy some land and plant trees,” he says without a second’s hesitation. 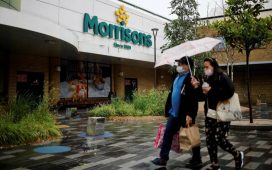 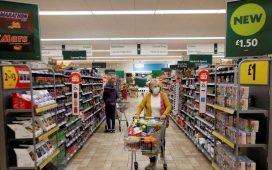