Architecture studio Foster + Partners has revealed updated visuals of The Tulip tourist attraction in the City of London showing its interiors and base.

Foster + Partners created the updated visuals ahead of the public enquiry into the planning application for The Tulip viewing platform, which began today.

A review is taking place as London mayor Sadiq Kahn rejected the proposal after the City of London had approved the attraction’s construction.

The visuals show several of the spaces that would be created within the planned 305.3-metre-high tourist attraction.

These include The Tulip’s Sky Bar, which would be built within a glass dome at the tip of the structure.

The visuals show the glass-fronted atrium space, which will include the Skybridge with a glass floor.

There are also images of several of The Tulip’s viewing galleries as well as visuals of the Aspire London Space education and community facilities.

Foster + Partners has also revealed several visuals showing the areas surrounding the base of the tower, which would be built directly alongside Foster + Partners’ Stirling Prize-winning 30 St Mary Axe skyscraper. 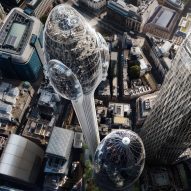 Billionaire Jacob J Safra, who owns the skyscraper that is better known as the Gherkin, would fund the construction of The Tulip.

At the base of the tower, Foster + Partners plans to create a small park.

The studio has also designed a two-storey, glass-walled pavilion, which would be topped with a rooftop garden.

The concrete viewing tower, which will be wrapped with a series of gondola ride attractions, has proved controversial since it was first revealed in 2018.

Although the structure was approved by the City of London planners, London mayor Kahn rejected the towers planning application.

This lead to Foster + Partners launching an appeal in January 2020. The government will now make a final decision on whether the attraction will be built.

The controversy surrounding the project did not surprise Foster + Partners founder Norman Foster, who described the tower as  “inevitably controversial” last year.

However, the British architect believes that like the Gherkin, the structure has the chance to become “a world symbol of London”.

Visuals by DBOX for Foster + Partners.

2020 Historic Photographer of the Year Awards

'Sisterhood of sorrow': an art auction for families of black women killed by police

Afrofuturism in Armenia: welcome to the Yerevan Biennial – in pictures

Visual Acoustics: The Modernism of Julius Shulman review – a lens on California dreaming

Greetings from Cape Cod: the other side of a much-loved vacation spot – in pictures