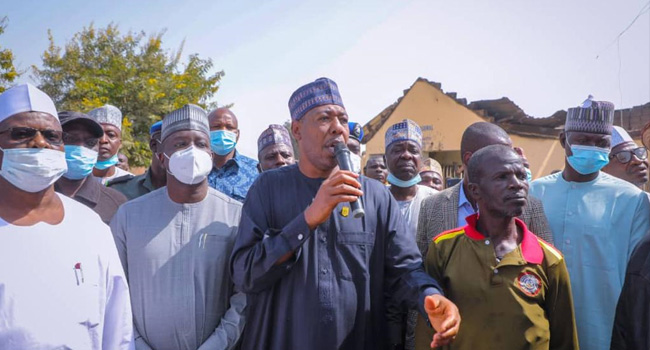 The Governor of Borno State, Babagana Zulum has paid a visit to communities attacked by Boko Haram insurgents on Saturday evening, in Hawul local government area in the southern part of the state and he is promising them that better days are ahead.

The governor who inspected the destroyed property in Yimirshika, Azare, Sabon-Kasuwa and Shafa communities immediately ordered the reconstruction of properties, including a police station and market stalls.

He ordered the provision of six patrol vehicles and other security components to strengthen local security network in Shafa while surveillance vehicles are to be provided for hunters and vigilantes in Yimirshika.

Three persons were killed in Shafa, among whom were two hunters and a civilian.

In addition to that, thousands of bags of farm produce recently harvested by farmers were also looted by the insurgents.

Governor Zulum assured the people that the government is doing all within its powers to provide security and ensure the good welfare for the citizens.