And summer arrival Ziyech then turned provider seven minutes later, sliding through Timo Werner who side-footed an effort beyond the onrushing Pope.

Chelsea rise to fourth while Burnley remain 18th in the table, with Ashley Barnes missing one of the Clarets’ few chances when through on goal in the opening minutes.

Chelsea ended a run of back-to-back goalless draws by emphatically beating Russian Premier League side FK Krasnodar 4-0 in the Champions League on Wednesday.

And their attackers were once again in full force with an Abraham header forcing Pope into a routine save shortly before Ziyech’s opener.

The visitors’ six key summer signings, Kai Havertz, Ben Chilwell, Edouard Mendy, Thiago Silva, Ziyech and Werner all started for the first time after Werner replaced Christian Pulisic who awaits a scan after tweaking his hamstring in the warm-up.

And, after rallying against some early Burnley pressure in the second half, goals from Zouma and Werner sunk the hosts before substitute Olivier Giroud poked in a low cross from Chilwell only to be flagged for offside.

The Blues, who have often been criticised for looking top heavy this season, were rarely threatened at the back, Barnes’ early chance the only moment a fourth consecutive clean sheet looked in doubt.

Clarets look out of ideas

Despite Sean Dyche repeatedly calling for his squad to be strengthened, permanent signings this summer were limited to Brighton midfielder Dale Stephens and back-up goalkeeper Will Norris.

And Stephens, starting for just the third time this season, was taken off by Dyche at half-time as Burnley struggled to maintain possession.

Barnes could have given the hosts an early lead but failed to punish Chelsea’s high line, looping his effort off target when put through on goal by full-back Matthew Lowton.

The Lancashire side were unlucky in their loss to Tottenham last week and should have come away with all three points in the fixture before at West Brom.

But against an in-form Chelsea side they looked toothless, with this latest defeat meaning they have collected only one point from their opening six games.

Burnley are away at Brighton & Hove Albion in the Premier League on Friday, 6 November (17:30 GMT) while Chelsea return to European action, hosting Rennes in the Champions League on Wednesday, 4 November (20:00). 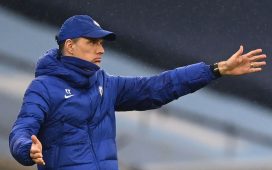