A richly embroidered jacket by Yves Saint
Laurent inspired by Vincent van Gogh’s “Sunflowers” was sold at auction
Wednesday for 382,000 euros ($420,000), a record for a garment from the
celebrated French designer.

The jacket, which was once modelled on the catwork by supermodel Naomi
Campbell, had been expected to fetch between 80,000-120,000 euros at the
Christie’s sale.

It was bought by the National Gallery of Victoria in Melbourne,
Australia.

The bright yellow and orange jacket took haute couture embroiderers
Maison
Lesage more than 600 hours to stitch by hand, according to the Yves Saint
Laurent museum’s website. It was part of Saint Laurent’s 1988 spring/summer
collection.

Only four of the sequined jackets, which are lined with silk, were ever
made.

The blue and purple garment was auctioned for 175,500 euros — four times
the guide price — in January out of the closet of Lebanese-born
entrepreneur
Mouna Ayoub, one of the world’s richest women.

“I have always been fascinated by painting, so it was only natural that
it
should inspire my creations,” the designer wrote in a catalogue for a 2004
Paris exhibition.
Yves Saint Laurent died in 2008, aged 71.(AFP) 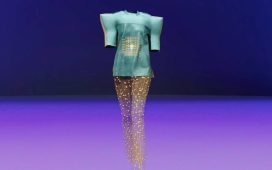 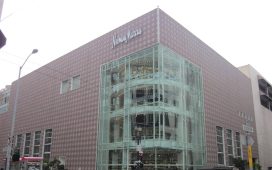