Wright & Wright completes overhaul of Museum of the Home in London


Architecture studio Wright & Wright has completed a renovation and extension of the 18th-century Museum of the Home in London, UK.

The Museum of the Home, formerly known as the Geffrye Museum, is housed within Grade-1 listed almshouses built in Hackney, east London, in 1714.

They were transformed into a museum in 1914 after being bought by the city council.

Wright & Wright was asked to create more public and exhibition spaces for the museum, while also reversing detrimental alterations made to it in the 20th century.

The studio achieved this by opening up the museum’s lower ground level, reinstating its first floor and adding two garden pavilions.

“The buildings are beautiful but had been destabilised by the original alterations, when the staircases, internal partitions and first floors were taken out, with openings cut through party walls on the lower ground floor in just the wrong place,” explained the studio’s partner Clare Wright.

“The original alterations meant that only one of the three floors was being fully used,” she told Dezeen.

The biggest change that Wright & Wright made to the museum was the opening up of the lower ground floor, which involved excavating the site by one metre.

As well as providing public access to this space for the first time in the building’s history as a museum, this also created 80 per cent more exhibition space for the museum’s collections, which span 400 years.

Original details throughout the lower ground were preserved wherever possible.

“We saw that if we dug down just a metre in the lower ground floor, we could provide even more gallery space than the client asked for in their brief,” Wright said.

“We kept whatever original features we found – such as the curves of the brickwork on the lower floor, that was for lighting a fire and heating a copper pan for washing clothes,” she added.

The museum’s first floor was also reinstated and its roof space opened up, creating room for a new library, archive and study with views of the museum’s gardens.

To ensure accessibility throughout the Museum of the Home, Wright & Wright made sure each space has level access and optimal lighting.

This forms part of a wider restructure of the museum’s circulation, for which Wright & Wright has also introduced two lifts and more flexible entry and exit points.

One entrance has been introduced directly beside the adjacent Hoxton Overground Station in a bid to help increase footfall.

Other external changes to the Museum of the Home include the introduction of the two new multi-purpose learning and event pavilions on either side of the museum.

The pavilions are discreetly placed and designed to ensure they do not detract from the original buildings. One is clad in brick and the other larch, each with a grey-black colouration.

“We placed [the pavilions] carefully so they sit beyond the ends of the central range of the almshouses and are attached but visually separate,” said Wright. 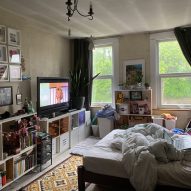 A green roof was added to one pavilion to help enhance biodiversity across the site.

This green roof is part of the wider landscape design for the museum, in which the existing gardens have been replanted to showcase changes and trends in urban gardening since the 17th century.

Wright & Wright’s overhaul is complete with a new cafe and large reception area that contains toilets, cloakrooms and lunchrooms for visiting school groups.

The cafe, housed in a former Victorian pub next to the site, has a light-filled dining area and terrace that overlooks the new station-side entrance.

Wright & Wright is an architecture studio based in London that was founded by Sandy and Clare Wright in 1994. It was appointed for the Museum of the Home overhaul in 2014.

Elsewhere, the studio is currently developing the new home for the Lambeth Palace Library – one of the UK’s oldest libraries that has had a publicly accessible collection since 1610.

Photography is by Hufton+Crow unless stated.

Jamie Hawkesworth: ‘Everyone I photograph is as important as everyone else’

The big picture: sun’s out, bums out! Isle of Wight festival,1969

Liverpool in fight to save waterfront’s heritage status

American history all sewn up – in pictures

Fancy a backyard makeover? Better join the long queue for a garden designer