The world’s largest iceberg is on a collision course with the British Atlantic island of South Georgia, threatening the territory’s penguins and seals.

The iceberg – known as A-68a – is now 150km (930 miles) long and 48km (30 miles) wide. It is currently travelling through an area known as ‘iceberg alley’ and is expected to run aground near the shores of the British Overseas Territory.

Such an event could be disastrous for the local penguin and seal populations as there is a risk their established foraging routes could be blocked, hampering them from feeding their young.

Creatures living on the seafloor would also be crushed where the iceberg landed, the BBC reported, further disturbing the ecosystem in the area.

Professor Geraint Tarling from the British Antarctic Survey (BAS) told the BBC that if the iceberg gets stuck it could stay in position for 10 years and disturb South Georgia’s economy as well as its ecosystem. 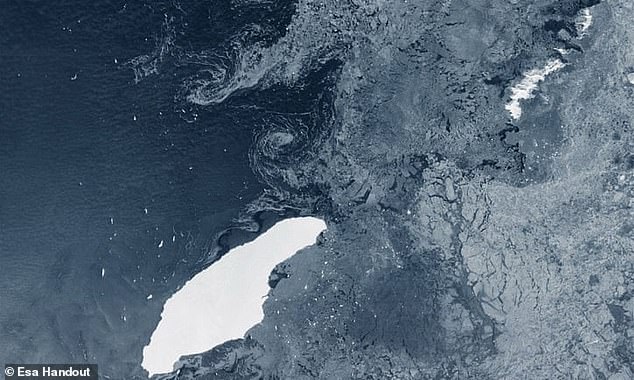 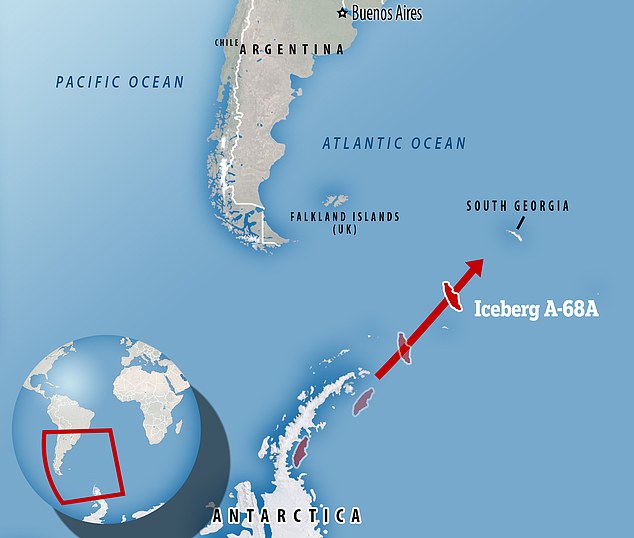 The world’s largest iceberg, known as A-68a, has been travelling towards the British Overseas Territory of South Georgia since breaking off from Antarctica in 2017

Fears are rising that the mammoth mass might land in one of the local fishing industry’s most productive areas.

Among the potential negative effects of the iceberg grounding off South Georgia, there are also some positives.

Tarling said icebergs carry huge amounts of dust with them that will fertilise the ocean plankton around them – a benefit that will travel up the food chain.

A68a has been drifting since breaking away from Antarctica’s Larsen C shelf in mid-2017.

Initially known as A-68, the iceberg was rebranded A-68a after smaller parts broke off from it as it travelled.

It is now just a few hundred kilometres away from South Georgia’s southwestern shore.

As it moves closer to the British Overseas Territory, BAS scientists are working with experts in other fields to chart its path.

Currents, weather and the shape of the iceberg – which resembles a pointed finger when seen from above – could affect the course it takes.

Dr Andrew Fleming told the BBC that a request had been sent to the European Space Agency for more satellite imagery, which would allow the BAS team to track the satellite regardless of weather conditions. 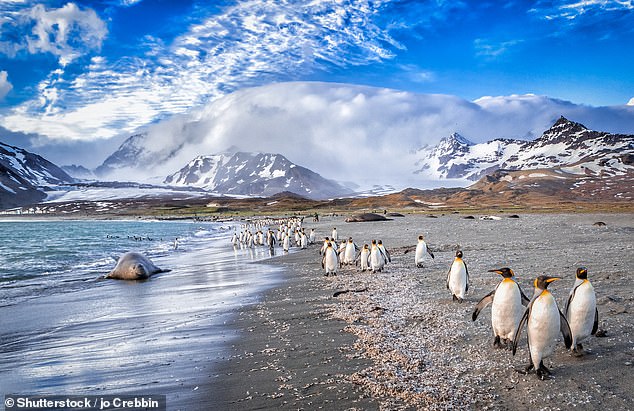 South Georgia island is home to penguins and seals, whose foraging routes could be disrupted if the A-68a iceberg grounds off its coast [File photo]

While such imagery suggests that the iceberg is on a direct path for South Georgia, nothing is certain according to mapping specialist Dr Peter Fretwell.

‘The currents should take it on what looks like a strange loop around the south end of South Georgia, before then spinning it along the edge of the continental shelf and back off to the northwest.

‘But it’s very difficult to say precisely what will happen,’ he told the BBC.

He added that he ‘fully expected’ the huge mass of ice to have broken apart by now considering the ‘huge fractures’ that can be seen running through it on satellite imagery.

‘If it spins around South Georgia and heads on northwards, it should start breaking up. It will very quickly get into warmer waters, and wave action especially will start killing it off,’ he said.

The waters around South Georgia – known as ‘iceberg alley’ – are littered with some of Antarctica’s largest icebergs.

Strong currents push the huge blocks of ice up calved from Antarctica before their keels hit the continental shelf surrounding the territory.

WHAT IS THE A-68 ICEBERG AND WHAT CAUSED IT TO BREAK AWAY FROM ANTARCTICA?

In July 2017, a huge crack in Antarctica’s Larsen C ice shelf caused a trillion-ton iceberg – the third biggest ever recorded – to break off from the icy southern continent.

The huge chunk of ice, dubbed iceberg A-68, measured 5,800 square kilometres (2,240 square miles), making it around the size of Delaware, or four times the area covered by Greater London.

A-68a is now (93 miles long and 30 miles wide. In November 2020, it was travelling through an area known as ‘iceberg alley’ and was expected to run aground near the shores of the British Overseas Territory of South Georgia.

Experts have found that cracks are still growing on Larsen C, and if they continue to grow, it’s possible that the ice shelf could collapse.

If all of Larsen C collapses, the ice it holds back might add another 4 ins to global sea levels over the years.

Many scientists argue that a calving event was not necessarily due to climate change.

Instead, it may simply reflect the natural growth and decay cycle of an ice shelf.