World leaders expressed concern over the unrest that occurred on Capitol Hill on Wednesday while condemning the violence that took place.

U.K. Prime Minister Boris Johnson said: “Disgraceful scenes in U.S. Congress,” Johnson tweeted. “The United States stands for democracy around the world and it is now vital that there should be a peaceful and orderly transfer of power.”

“Shocking scenes in Washington, D.C.,” NATO Secretary General Jens Stoltenberg said. “The outcome of this democratic election must be respected.”

From Canada, Prime Minister Justin Trudeau told a Vancouver news outlet Wednesday he was following the situation. “There is an important electoral process unfolding in the United States and I think we all want it and need it to unfold properly and peacefully. And so we certainly hope things will calm down.”

Leaders from Italy, Germany, and other European nations addressed the issue as well.

“We follow the events in the USA with concern and invite the parties to calmness,” he said. “We believe that problems will always be solved within law and democracy. As Turkey, we have always been in favor of the law and democracy and we recommend it to everyone.”

“In the eyes of the world,” European Union leader Joseph Borrell Fontelles said, “American democracy tonight appears under siege. This is an unseen assault on US democracy, its institutions and the rule of law. This is not America. The election results of 3 November must be fully respected.”

Ukraine’s foreign affairs minister also expressed concern over the scenes from Capitol Hill. “Concerning scenes in Washington, D.C. I’m confident American democracy will overcome this challenge,” Minister Dmytro Kuleba said. “The rule of law & democratic procedures need to be restored as soon as possible. This is important not only for the U.S., but for Ukraine and the entire democratic world as well.”

A number of domestic leaders on both sides of the aisle condemned the rioting as well.

House Minority Leader Kevin McCarthy, R-Calif., blasted the violence as “so un-American.” He told Fox News’ Bill Hemmer: “I condemn any of this violence. I could not be more disappointed in the way our country looks at this very moment. People are getting hurt.”

The shocking scenes coming out of the Capitol showed shattered windows and people clashing with police officers. One woman has died after being shot on the grounds of the Capitol.

Wednesday’s riots came against the backdrop of planned demonstrations of Trump supporters protesting the handling of the 2020 election results. The storming of the Capitol took place after months of President Trump telling supporters that the election was stolen and Republicans raising red flags about apparent irregularities in ballot counts.

Vice President Pence declined President Trump’s request to overturn the election in the Senate, prompting the president to accuse him of cowardice.

Trump released a video Wednesday afternoon directing supporters to go home and allow for peace. “We have to have law and order,” he said. 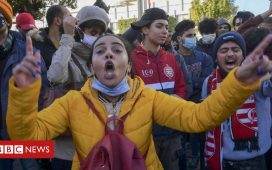 Tunisians question whether life is better after Arab Spring