Deborah Stubbington has a knack for taking something old and giving it a new lease of life.

The 40-year-old loves nothing more than transforming second-hand furniture from Facebook and charity shops.

Deborah, from Essex, began upcycling when she started renting in September 2019, as she didn’t want to spend a fortune on new furniture.

After gathering inspiration from mood boards on Pinterest, she started scouring the internet and local charity shops for bargains.

Deborah, who lives with her Jack Russell Gus, told Jam Press: ‘I love Pinterest, I’m always pinning ideas on there.

‘I love light interiors with a hint of colour and of course I’m always inspired by Instagram as I spend so much time on there.

‘I scour Facebook Marketplace several times a day. It is such a great place for picking up bargains.

‘I’ve found so many great bits like small pieces of furniture and small decor items too.

‘I also love a charity shop and have lots of items from both in my home.’

Almost two years on and she’s put her background in theatre set and stage design to good use and has created some incredible pieces.

Deborah found a TV cabinet from Facebook Marketplace for just £5 and transformed it with some black paint and rattan doors, which cost just £1.

She also elevated some bedside tables, a chest of drawers and some other bedroom furniture using sprays, paint and stick vinyl – which cost around £150 in total.

Elsewhere, Deborah gave an IKEA dining table a makeover, by using old parquet floor taken from a theatre she used to work in.

She also bought a cheap bathroom table from Amazon for £24 and added her own personal touches.

While most of her furniture is upcycled, Deborah has also purchased a few bits from high street chains.

She added: ‘I always think the best way is to think how you can repurpose what you already have.

‘There are so many great products on the market now like sprays, paint and sticky vinyl that mean you can upcycle items on a budget.

‘Even a simple change of handles can transform a piece.

‘My advice is to check out sites like Facebook Marketplace and eBay but also mix in new items from budget stores like B&M or Matalan home.’ 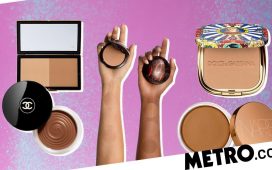 The best new bronzers on the block for the SS21 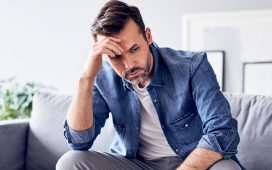 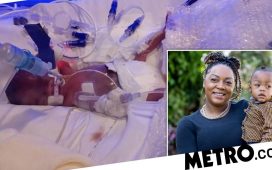