TikTok user Nicole Anderson moved people to tears with her heartwarming video, which captures the moment she asked her stepdad to officially adopt her as his daughter 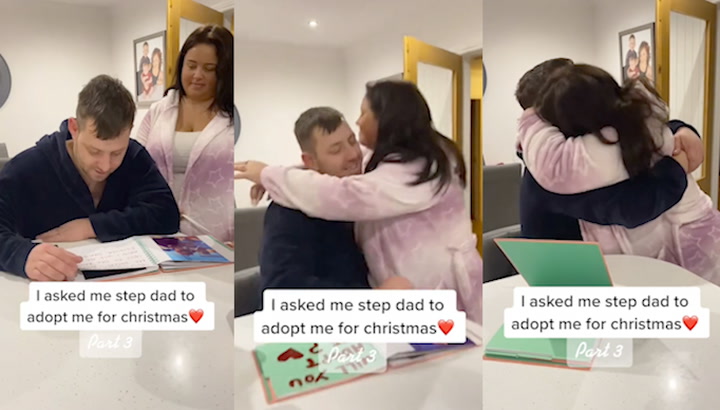 A woman has gone viral online after sharing the touching moment she asked her stepdad to adopt her for Christmas – which has left people in tears.

Nicole Anderson, 21, has known her stepdad Brady Nicholson since she was just one year old and says she began calling him “dad” when she was 12.

And after growing up with the 36-year-old fisherman as her main father figure, she first told her mum Vicky Nicholson, 39, that she wanted Brady to legally adopt her for Christmas last year.

Brady’s job means he spends long periods of time away from home, so Nicole planned the adoption around the Christmas period when the family would all be together.

Nicole began calling Brady ‘dad’ when she was 12
(

The woman, from Annan, Dumfries and Galloway, then got to work putting together a scrapbook containing all her favourite memories from her childhood with Brady, so that he could look through them before making the big decision.

The scrapbook contained a look back at her mum and stepdad’s wedding, as well as family holidays and the births of siblings.

And when Nicole presented Brady with the book, she decided to film the touching moment so she could post the footage on TikTok.

In the clip, Nicole can be seen handing the book to Brady, who reads out the words on the final page: “Will you adopt me?”

Nicole made a scrapbook of memories to present to Brady
(

The dad immediately says, “sure will” and the pair exchanged an emotional hug.

And Nicole has admitted she was “scared” to ask Brady the important question – even though she knew he’d say yes.

She said: “I felt scared and excited at the same time.

“I’m so glad he agreed, although I knew he would because of how much he loves me.

“Everyone was over the moon. It was hard for me to tell my biological dad, but he was happy for me.”

The adoption has not yet been made legal because lockdown has been adding extra obstacles to the process.

But the pair are still as close as ever, as Nicole says their small age gap of 15 years helps them “understand each other”.

She added: “I’ve always known he wasn’t my real dad.

“He’s always treated me as his own – whenever I had problems he’d be by my side. He never let me struggle and just stepped up as a father figure.

“I think because we are so close in age, we understand each other more and it makes us bond so much better.

“It’s the same with my mum. We are all best friends.”

Nicole’s original video left TikTok users emotional, as many of them said they’d been reduced to tears by the heartwarming clip.

While another added: “How lovely it made me cry, happy for you both!”

And a third posted: “I’m bawling.”

‘My husband’s never home and lies to me, so what’s the point of our marriage?’

Hedonism is overrated – to make the best of life there must be pain, says this Yale professor