William Hague, who unsuccessfully battled against Tony Blair in the 2001 general election has warned against a Labour government led by Jeremy Corbyn and John McDonnell. He said a Labour victory would see an end to normal financial management, which will lead to either “a siege economy” or “national bankruptcy”. As a result, the former Tory leader calls on Blairites and centre-ground voters to back Boris Johnson’s Tory party in the upcoming general election.

In an article for the Daily Telegraph, Mr Hague said the election he fought in 2011 is “utterly different” to the contest between Mr Johnson and Mr Corbyn.

Instead of consensus politics, the country faces “a very big change”, and said “the status quo is not even on the ballot paper”.

Under a Tory government the UK will leave the European union “for sure this time” but wants a Labour victory could spell disaster for Britain.

He said: “A Labour victory would mean any normal notion of financial management was at an end, leading within a few years either to a siege economy or to national bankruptcy.”

Mr Hague continues to attack Labour’s plans and even states the launch of the Labour Party manifesto makes the decision for swing voters “much easier”.

He said: “Their programme of much heavier taxes on inheritance, capital gains, financial transactions and higher incomes revealed a burning hatred of wealth creation.

“They are true socialists, retaining their admiration for the policies of the late Hugo Chavez even as Venezuela suffers the loss of half its entire national income.

“They have little understanding of the fact that many businesses and entrepreneurs can move to another country if they wish, and no memory of the unremitting incompetence of nationalised industries in the past.

JUST IN: Neil erupts as Corbyn ignores him SIX times over antisemitism apology

“This is not a programme of an ideological party or one that is moving sharply to the Right.

“Its policies would not have been out of place in either main party 18 years ago.”

As a result he calls on swing voters and those who backed Mr Blair over him in the 2001 election to vote for the Tories on December 12.

He praised former Labour MPs Ian Austin and John Woodcook for recommending voters back the Tories and urged on Blairites to follow suit.

He said: “It is time more Blairites had the courage of their convictions and followed them.

“As I look back on the centrist politics that Blair and I espoused at the turn of the century, the Tories are the only ones who come close to being its inheritors.” 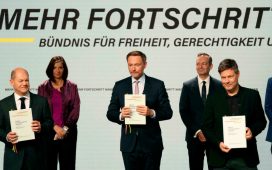