Parked outside an espresso bar on Berlin’s Potsdamer Platz junction, Maximilian Fritzsch’s mobile coronavirus testing unit aims for similar speed of service as an on-the-go shot of caffeine. Working from the back of a cargo e-bike, staff in lab coats take a quick swab from the nostrils of stressed commuters, who usually receive the result in their inboxes within 15 minutes.

“It is a bit physically intrusive”, said office worker Luisa Larsen, 42, as she impatiently checked her smartphone for the test result. “But then again it’s free, and it feels like the responsible thing to do.”

Berlin’s 10 “coronabikes” are part of a private sector mass-testing infrastructure that has sprung up in pop-up tents, cafes, night clubs and shisha bars across Germany over the last three months, in a speedy fashion at odds with Germany’s reputation for fastidious bureaucracy.

For owner Fritzsch, whose company Tokuri used to import sake and soft drinks from Japan, the daily free Bürgertests or “citizens’ tests” have been a financial life-saver since bars and restaurants closed down: the cost of each test is reimbursed to service providers by the federal states.

A number of high-profile cases of fraud, and enduring questions over the accuracy of antigen (also known as lateral-flow) tests, have prompted criticism of health minister Jens Spahn’s scheme for triggering a free-market free-for-all, something Die Welt newspaper called a “testing gold-rush”.

“It’s an absurd system, and very atypical for Germany”, said Matthias Orth, of the Institute of Laboratory Medicine at Stuttgart’s Marienhospital. Earlier this year, Germany’s disease control agency reported that one commonly used antigen test – which only detects Covid-19 cases on days the viral load is highest – had missed 61% of asymptomatic infections at the emergency ward of a Stuttgart’s Katharinenhospital clinic.

“You can only carry out totally reliable tests in a controlled laboratory environment”, said Orth, arguing a potentially fatal disease such as Covid-19 required pin-point accuracy rather than broad-brush surveys of the pandemic situation. The coronabike staff who carry out the tests have all gone through a two-day crash course in how to accurately take swabs and observe hygiene standards, but most of them have no previous medical or laboratory experience – many used to work in the services or entertainment industry.

Yet while the more reliable PCR tests take about 24 hours to return a result and can only be analysed by a limited number of certified laboratories, antigen tests have offered speed and volume.

A new study published by the University of Bonn on Thursday suggests weekly rapid tests for 42% of Germany’s population in May 2021 played a more crucial part in the steep drop-off in infection rates than vaccines.

“From a doctor’s point of view, I understand the reservations”, said Hans-Martin von Gaudecker, a professor of Applied Microeconomics at the University of Bonn and one of the study’s co-authors. “But from a public health perspective, it made a massive difference”.

Since Germany’s Robert Koch Institute only records the number of certified PCR tests, the study has had to work with projections based on surveys of people who make use of rapid antigen tests. It estimates that vaccinations account for only around 16% of the drop in infections during May, while mass testing accounted for 41% and seasonal weather change another 43%.

“A large-scale testing infrastructure was set up relatively late, but it has played an essential part in quashing Germany’s third wave”, concedes Janosch Dahmen, a doctor and health policy expert for the Green party.

As more and more people are fully vaccinated, and fewer and fewer restaurants, bars or hairdressing salons require certified proof of a negative result for entry, testing centres are starting to close down with the same speed they popped up across German cities. In Berlin, which has the capacity to carry out 4.7m antigen tests a week, the senate has reported only 741,000 tests taken over the last seven days.

As of the start of July, the German government has lowered the financial incentives for people who run their own test centre, dropping the compensation for each test from €18 (£15.44) to €11.

The situation is mirrored in France, where daily testing peaked at 6.6 per thousand people in April and has since slipped to about 3.6. From next week, non-residents in France will be charged €49 for a PCR test and €29 for a lateral flow test out of what the government called a “spirit of reciprocity” with other EU member states, most of which charge between €60 and €250.

France’s National Academy of Medicine last week recommended non-vaccinated people should be asked to pay for “personal convenience” tests, arguing that free mass testing – with no limit on the number of tests an individual can take – could be encouraging some people not to get vaccinated.

Yet health experts warn it would be a fatal mistake for European governments to allow its improvised testing infrastructures to wither away.

“If you look at low vaccination rates in some parts of the world, and the speed with which we have seen new variants develop, it should be clear that this pandemic is far from over,”, the Green politician Dahmen told the Guardian.

“Especially if we don’t manage to agree on consistent pandemic regulations across Europe, then testing will remain a vital public health screening tool.”

To be effective against a variant-driven new wave, he said, parts of Germany’s testing system would need upgrading. Currently, the number of tests carried out by small providers such as coronabike are reported to the country’s disease control agency every day before midnight, but they are not fed into Corona warning app that was originally meant to allow a real-time monitoring of the pandemic situation.

Doctors also suggest that pooled PCR tests, rather than individual antigen tests, could be more effective at hemming in outbreaks at nurseries and schools. Some German nurseries already use so-called “lollipop tests”, with children and carers sucking on swabs for 30 seconds in the morning that are then analysed overnight as one sample, which is less strain on labs’ capacities. Only if the group test shows up positive are its members tested individually.

Berlin’s coronabikes could also face a more pragmatic obstacle as the season turns. Antigen tests are meant to be carried out at room temperature. On hot summer days, Fritzsch’s riders keep their testing kids stored in a drawer stuffed with ice packs. But scientists warn temperatures below freezing point could further affect the reliability of the tests.

“I will have to ask myself whether I can really let my riders hang out in the ice and rain all day,” said Fritzsch. 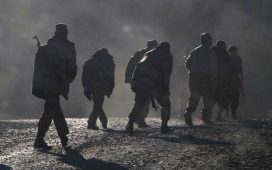