Wildfire review – potent Irish drama about the legacy of violence


Two fiercely committed performances are the bedrock of this drama from writer-director Cathy Brady. Nora-Jane Noone plays Lauren, who lives near the Northern Irish border with her partner, and works in a vast Amazon-style fulfilment centre; and Nika McGuigan (from RTÉ’s TV comedy Can’t Cope Won’t Cope) plays her troubled sister Kelly, returning home after a mysterious yearlong absence. This tense reunion revives painful memories of their mother, who took her own life when they were both children. Yet Kelly’s homecoming also appears to relight the wildfire in the hearts of both women, as they challenge the menfolk thereabouts who are still in hock to the macho cult of terrorist violence.

This sombre film has an extra shadow of sadness because it marks the final performance of McGuigan, who died of cancer in 2019 at the age of 33. There are powerful moments and surreally disquieting images in Wildfire, which incidentally reminded me in some ways of Pat Murphy’s classic Northern Ireland drama Maeve from 1981, also about a young woman returning home to make a reckoning with the past. I especially liked the strange tableau of Lauren and Kelly in the pub dancing wildly to Van Morrison’s Gloria on the jukebox and then finally stopping exhausted, as if emerging from a dream, to see a bunch of faintly sinister middle-aged guys glowering at them resentfully from the bar.

There are, admittedly, some slightly strained contrivances, and when Kelly is revealed to have a pocketknife in the opening scene, some might be reminded of Chekhov’s maxim about what has to happen to a gun revealed in act one. But it’s a potent drama – and a melancholy reminder of the talent that Irish cinema and TV lost in McGuigan.

Wildfire is released on 3 September in cinemas.

Gordon Brown: Scots see that English values aren’t all about ‘toffs and Brexit’

The Guardian view on Brexit diplomacy: thaw, not Frost | Editorial 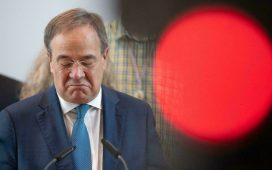 As Germany's general elections near, things are going wrong for the right

Fears London and Paris would die due to Covid are unfounded, finds survey