NEWSCABAL > science > Why we need to spend a third of our lives ASLEEP!
science

Why we need to spend a third of our lives ASLEEP!


Sleep’s true value and the damage done by disturbances to our rest has finally been discovered by scientists who say it is a vital time for rest and recovery.

Three dimensional time-lapse images of activity in zebrafish shows that animals require sleep in order to protect their DNA. 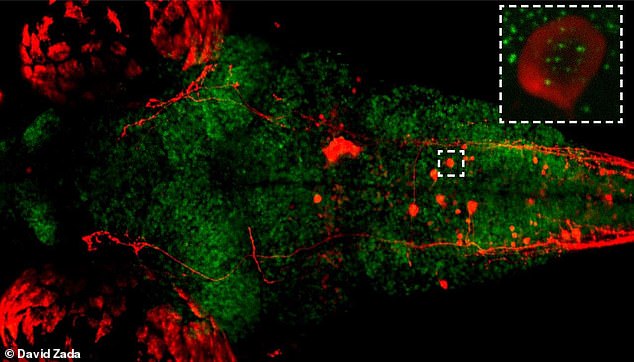 Sleep is the downtime that allows our nerve cells to perform vital ‘maintenance’ tasks, suggests a new study. Imaging of chromosome dynamics (green) in A single neuron (red, dashed box) in a live zebrafish  larvae

Sleep has remained essential to all organisms with a nervous system, including invertebrates such as flies and jellyfish, throughout evolution.

Little is known about why it is a necessity despite many studies that show sleep is important for memory consolidation and learning ability,

In the study, researchers at Bar-Ilan University in Israel revealed the body repairs itself during sleep.

Using the 3D time-lapse imaging techniques in live zebrafish, the team were able to define sleep in a single chromosome resolution.

The zebrafish was used because of its transparency and the similar organisation of its brain to humans.

This makes them the ‘perfect’ study animal as researchers can study single cells within a live animal.

DNA damage can be caused by many processes, including radiation and oxidative stress.

Even the processes that allow our brains to function can be a cause such damage.

The current work shows that during wakefulness, this damage consistently accumulates and can reach unsafe levels.

The role of sleep is to normalise the levels of DNA damage in each single neuron, the study says.

A certain amount of repair is done while awake but, according to the researchers, the maintenance process is not efficient enough.

Therefore, an ‘offline’ sleep period with reduced input to the brain needs to occur. 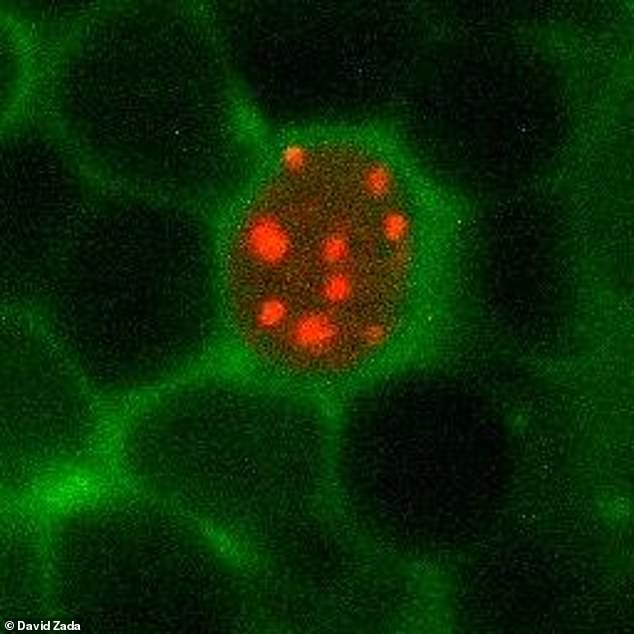 Scientists say their groundbreaking research may finally explain why people spend around a third of our lives asleep. This image shows simultaneous imaging of chromosome dynamics (red) and neuronal activity (green) in live zebrafish 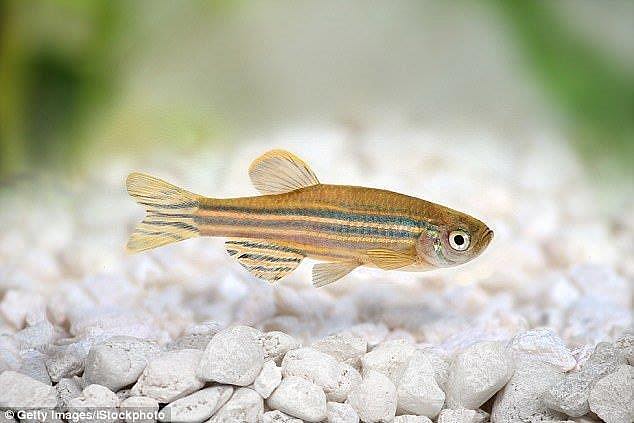 ‘Roads accumulate wear and tear, especially during daytime rush hours, and it is most convenient and efficient to fix them at night, when there is light traffic.’

He calls the accumulation of DNA damage the ‘price of wakefulness’.

He and his colleagues hypothesised that sleep consolidates and synchronises nuclear maintenance within individual neurons, and set out to confirm the theory.

Using a high resolution microscope, the movement of DNA and nuclear proteins within the cell – inside the fish – can be observed while the fish are awake and asleep.

The researchers were particularly surprised to find that chromosomes are more active at night, when the body rests, but the increased activity enables the efficiency of the repair to DNA damage.

Professor Appelbaum said the results establish chromosome dynamics as a potential marker for defining single sleeping cells and propose that the restorative function of sleep is nuclear maintenance.

He said: ‘We’ve found a causal link between sleep, chromosome dynamics, neuronal activity, and DNA damage and repair with direct physiological relevance to the entire organism.

‘Sleep gives an opportunity to reduce DNA damage accumulated in the brain during wakefulness.’

‘Despite the risk of reduced awareness to the environment, animals – ranging from jellyfish to zebrafish to humans – have to sleep to allow their neurons to perform efficient DNA maintenance, and this is possibly the reason why sleep has evolved and is so conserved in the animal kingdom.’

HOW TO COPE WITH SLEEP PROBLEMS

Poor sleep can lead to worrying and worrying can lead to poor sleep, according to the mental-health charity Mind.

A lack of shut eye is considered a problem when it impacts on a person’s daily life.

As a result, they may feel anxious if they believe lack of sleep prevents them from rationalising their thoughts.

Insomnia is also associated with depression, psychosis and PTSD.

Establishing a sleep routine where you go to bed and get up at the same time every day can help a person spend less time in bed and more time asleep.

Having tech-free time an hour or so before bed can also prepare you for sleep.

If you still struggle to nod off, keeping a sleep diary where you record the hours you spend asleep and the quality of your shut eye on a scale of one to five can be a good thing to show your doctor.

Also note how many times you wake in the night, if you need to nap, if you have nightmares, your diet and your general mood.

Talking therapies can help your recongise unhelpful thought patterns that might affect sleep.

While medication, such as sleeping pills, can help break short periods of insomnia and help you return to better a sleeping pattern.