More facts have emerged on the reasons why the Enugu State Commissioner for Lands and Urban Development, Dr. Victor Nnam, resigned his appointment with the state government on Friday.

Recall that Nnam, who was appointed commissioner by Governor Ifeanyi Ugwuanyi in 2019, had in his resignation letter claimed that he resigned because a proposal to reform land administration in the state was turned down without any reason given.

The former commissioner had been battling with some of his former colleagues and recently, with the state House of Assembly over allegations of land racketeering.

In the resignation letter titled: “Letter of resignation of my appointment as the Commissioner for Lands and Urban Development, Enugu State,” Nnam cited the recent removal of the professional heads of a department under him as a reason for his resignation.

The letter which he personally addressed to the governor, partly read: “Sir, when you appointed me the Commissioner of Lands and Urban Development, Enugu State in 2019, I accepted the appointment with the hope that I was going to be allowed to bring on board world best practice in land administration.

“I immediately proposed the establishment of a GIS land administration system to enable the ministry stamp out land grabbers and create investors’ confidence in our land system. The proposal was rejected without explanation till date.

“However, the reason for my resignation is the recent removal of the professional heads of department under me on punitive grounds for simply doing their jobs diligently. My conscience will no longer allow me to continue to serve your administration while those innocent professional senior civil servants are punished for doing the right thing.

“I hereby resign my appointment as the Commissioner for Lands and Urban Development, Enugu State with effect from today, Friday 29th of October, 2021, and submit the black Prado SUV with plate number IENSG 5712 to your office.”

When contacted on telephone, Nnam confirmed his resignation and noted that the governor had received the resignation letter.

Meanwhile, our correspondent, however, gathered that his resignation would not be unconnected with the ongoing faceoff between him and the state House of Assembly over alleged land racketeering in the ministry.

The Enugu State House of Assembly had in September set up a five-man committee to investigate cases of alleged fraud, extortion and over-taxation against Nnam and the Chairman, Enugu Capital Territory Development Authority, Josef Onoh.

But Nnam and Onoh did not appear before the committee of the House on three occasions, until the House, during its plenary on October 14, summoned the duo before its Committee on Whole, where, again, Nnam was conspicuously absent during the sitting.

A former Chairman of Ezeagu Council Area of the state, Chief Chukwudi Ezinwa, had petitioned the House alleging racketeering and fraud in the lands ministry. He accused the commissioner of re-allocating his land with a Certificate of Occupancy to another and subsequently issued the same with another CofO, describing it as abnormal.

Ezinwa had told the House that he acquired his land in 2008 and developed the same, but the same property was allotted to an unidentifiable owner with a C-of-O, in 2014.

While addressing journalists on Saturday, the former LGA chairman described Nnam’s resignation as an attempt to dodge the imminent probe, but said “his resignation will not save him. There is no hiding place for the former commissioner.”

Also, one Mr Jerry Nwamaka had approached the Enugu State High Court over an alleged sale of his land to one Mr Jude Agu by the former commissioner.

All efforts to get the state government’s reaction were unsuccessful as the phone number of the state commissioner for information was switched off as of the time of filing this report. 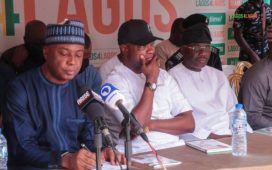