NINETEEN out of 24 Championship clubs wrote to EFL chiefs begging them not to sign the controversial new Sky TV domestic TV deal.

However their wishes were arrogantly ignored, raising the likelihood of a bloody civil war between raging ‘rebel’ clubs and the EFL.

A crisis council involving a number of the biggest hitters in the Championship took place in Birmingham today, as disgusted club chiefs met to discuss their next move.

SunSport can reveal Derby County, Stoke City, Middlesbrough, Aston Villa and Nottingham Forest all attended the meeting in a secret city centre venue to consider their options, after EFL chiefs called their bluff and put pen to paper to a new £595million five-year Sky TV deal against their express wishes.

That provocative move went down like a lead balloon amongst the rebels who made it clear their anger is aimed at their own League bosses rather than Sky.

A terse statement vowed to fight the EFL’s action and said: “Championship clubs are gravely concerned that the EFL Board has announced it has approved a new long- term domestic broadcasting rights deal.

“Nineteen clubs from the league wrote to the EFL asking them not to sign the proposed deal and to engage in meaningful discussions. This was ignored.

“The clubs discovered that in the space of 15 months, without our knowledge, material changes had been made to this draft agreement.

“When the EFL Board presented the new version of the deal – it gave more games and rights for less money and damaged the ability of clubs to control the decision to stream games and its pricing.

“Our issues are not with Sky, who we respect and value, but with the way in which the proposed agreement has been negotiated and explained to Clubs.

“We remain convinced that any solution to the broadcasting of EFL competitions can only be on the basis of protecting attendances and securing the financial position of all our 72 clubs.

“There is a calm determination within Championship clubs to ensure the matter is not left here.”

That final sentence will spark fears of an ugly backlash and heighten the threat of a breakaway lleague.

EFL chiefs angered 19 clubs led by Leeds and Derby, who had demanded the five-year contract be left unsigned.

But Prem chiefs made it clear they were not interested in expanding, while the FA signalled it would not sanction a rebel league.

Now it looks as if all-out war has been declared against the pen-pushers who signed the agreement against the will of their biggest members. 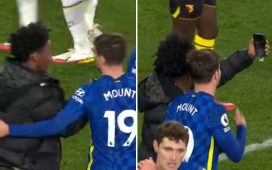