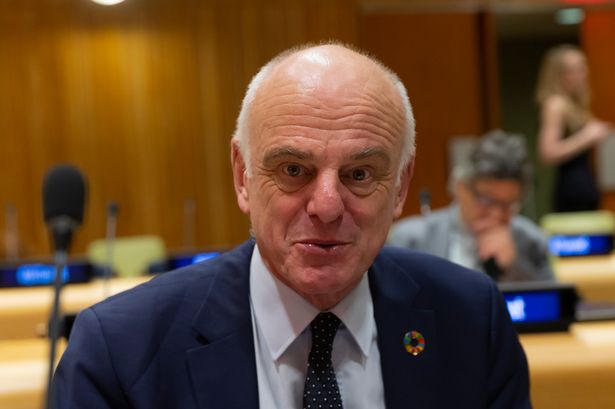 The World Health Organisation’s Special Envoy for Covid-19 has slammed Boris Johnson and Tory MP’s for “politicising” the use of face masks.

Dr David Nabarro insisted he finds it “absolutely weird” for the UK to assume one’s political position because they have chosen to wear a face mask.

Face masks and social distancing are critical to keeping Covid at bay, the WHO chief said.

But he hopes those measures will not be legally enforced in the long run in the UK as it may “provoke counter behaviour”.

On Sunday night, Tory MP Alex Chalk said he is self-isolating after testing positive for Coronavirus.

Tory MPs were mostly maskless at PMQs on Wednesday
(

When the Mirror did a headcount at 10.36am at PMQ’s last week, we saw 14 MPs on the government benches – seven with masks and seven without.

By comparison there were 19 MPs on the opposition benches, 18 with masks and one without.

Dr Nabarro stressed that people seeing MPs of a particular party in the House of Commons not wearing face masks is “meaningful” because they are in leadership positions.

The WHO chief said: “People pay a huge amount of attention to those who are in leadership positions, whether they are in the church, or are the manager of a football club or a school teacher, or indeed the local politicians, the mayors and the politicians who are in Parliament. Because of their talk and discussions on Twitter and so on, I’m very keen that there is role modelling.

He added: “The one most important requirement is that anybody in a decision making position should not trivialise or diminish these issues, and, in particular, should not to let the choice of strategy be something that is given a party political or ideological label.”

And responding to a question from the Daily Mirror, Dr Nabarro told Bronwen Maddox the Director of the Institute for Government: “I actually don’t think that one’s political position on this virus is going to have any influence on what (the virus is) going to do to oneself or one’s family or one’s community or one’s nation.

“I’ve noticed a lot of my public health colleagues are not quite sure how to position themselves with this very polarised reaction.

“It’s difficult, if public health people get sacked, if they’re doing their job and it happens not to align well with the boss of the country or the boss of the province or whatever it is. I am sorry to be stuck on that one but I am.”

Earlier today the PM’s spokesman was asked if MPs should be setting an example by wearing masks in the Commons.

“It remains a matter of personal judgement to decide based on the guidance which we’ve provided to the public,” Mr Johnson’s spokesman said.

“You can see the situations in which the PM chooses to wear a mask. Obviously it will depend on individual circumstances and things like prevalence of coronavirus as well. It’s down to the individual to make those judgements,” he added.

The Health Secretary Sajid Javid said he will be wearing his face mask when in the Commons on Budget Day because it will be packed.

The WHO chief did not hold back when discussing the UK’s “intense” vaccination programme which is hoarding vaccines from other countries who need them most.

“What I’m not so sure about is a few countries doing really intense vaccinations to try to end the pandemic, through vaccination, even vaccinating children, or giving booster doses to older people saying we’re going to try to go for complete immunological coverage.

“But that means the vaccine gets sucked up by countries that can afford to buy it, and can afford to keep the stock, which means that the rest of the world just doesn’t have enough, and that’s the situation we have at the moment.

“If I had a magic wand. I would say, can we please share the vaccine, fairly in all countries, so that those who are at greatest risk of death are prevented from dying.”

When asked by the Mirror if Mr Johnson should make wearing face masks a legal requirement, Dr Nabarro said: “Vaccines alone are not really going to stop this pandemic.

“A vaccine can prevent death, and severe disease, but to stop the virus spreading, and we need to do that, we have to use other techniques of which masking and distancing is one. And also having really good quality locally integrated public health services.

“So I’m very much with my colleagues who are saying, let’s adopt a systems approach to this problem and not trying to deal with it, with one intervention alone.

“And if I’m asked by decision makers in any country, including the UK, I’m saying there is a really important role for masking.

“There is a really important role for physical distancing particularly to try to avoid inhaling the air that’s exhaled by others.

“I don’t like the notion of mandating mask wearing because that then will provoke potential counter behaviour and all the other stuff that we’ve seen. And instead say let’s get to a point where it is normal practice, as it is in many countries in Southeast Asia right now, as it is in Italy and as it is in France.”

He told the Commons: “It is simply not right to have the profession at this stage, when we’re all making as taxpayers a big new commitment to the health service, demanding more lockdowns, demanding more restrictions.

“We’ve got to live with this virus.”

The Government said a further 38 people had died within 28 days of testing positive for Covid-19 as of Monday, bringing the UK total to 139,571.

Separate figures published by the Office for National Statistics show there have now been 164,000 deaths registered in the UK where Covid-19 was mentioned on the death certificate.