Where did Snow Patrol go for seven years? Gary Lightbody opens up


Gary Lightbody battled depression and alcoholism as Snow Patrol wrote their seventh album, Wildness. The band’s frontman tells the BBC about overcoming his demons, how Nick Cave helped him conquer writer’s block, and why he and Ed Sheeran want matching tattoos.

In the same time, you could have trained to be a doctor, launched a spacecraft to Saturn or filmed six series of Game of Thrones.

But Gary Lightbody was engaged in a much more serious pursuit – conquering a life-threatening addiction to alcohol.

“I was relying on booze to get me through the day, every day” he recalls.

“I’d started drinking on my own when I couldn’t find anybody to go out with. The fun element disappeared pretty rapidly, and I was just doing it out of compulsion.

“Then it starts to affect not just your health but your temper – I had a really short fuse – and your mental health. All sorts of things.”

Crucially, it affected his ability to write and perform.

“Some people write well on booze. I didn’t ever,” he says. “I’d only ever cough up hairballs.

“There were plenty of times I thought, ‘Well maybe that’s it – I’ve written all my songs.'”

While his Snow Patrol bandmate Johnny McDaid was off writing hits with Ed Sheeran and Rudimental, Lightbody’s condition worsened.

Things reached crisis point in June 2016, when he was diagnosed with infections in his sinuses, eyes and ears – a result of sustained alcohol abuse.

A doctor told him he had to stop drinking or he’d die – so he resolved to give it up for a month. Two years later, the 41-year-old is still sober. But it hasn’t been easy.

Getting clean forced him to focus on his mental health, triggering a “wave of self-hatred” that further exacerbated his inability to write.

The breakthrough finally came when he heard Nick Cave’s harrowing album Skeleton Tree, recorded in the aftermath of his teenage son’s death.

“The first track on it is called Jesus Alone,” says Lightbody. “It’s a very intense piece of music about a very dark thing that happened to him, and I think I listened to it 10 times in a row. Our producer, Garrett Jacknife Lee, put it on in the studio and I just kept saying, ‘again, again’.

“Garrett went to get some lunch and when he came back half an hour later, I’d written A Youth Written In Fire, start to finish.

“That whole song just came out. Whatever the vibration was in that Nick Cave song, it just rattled it out of me. It just shook loose what I’d been struggling desperately to shake for such a long time.”

A Youth Written In Fire traverses the peaks and troughs of Lightbody’s drinking years, steering the singer towards the resolution: “Those days are someone else’s life.”

After that, the songs came flooding out, and the story of the last seven years is written in their titles: Heal Me, Don’t Give In, What If This Is All The Love You Ever Get?

“I realised I can’t pull back any more. These things I’m so afraid of? I have to start writing about them,” says Lightbody.

“It helped me get through a lot of the things I’ve struggled with my whole life. It wasn’t intentional therapy but it became therapeutic to do it.”

Having unlocked his creativity, Lightbody was determined to push himself musically. The result is Wildness, Snow Patrol’s most musically daring album since their 2003 breakthrough, Final Straw.

The fantastic first track, Life On Earth, opens quietly but builds to a triumphant chorus, while the carefree Wild Horses surges forward on a supple guitar loop.

Lightbody pushes his voice into new territories – even surprising himself with the fractured, falsetto rasp he produced on the first single, Don’t Give In.

“It is at the very, very top of my range and it’s a supreme effort to sing it every night,” he says.

“But in the studio, for some reason, it seemed to come very naturally… Although the raspiness comes from the fact I had a cold.”

Initially, Lightbody planned to re-record those snot-infused vocals, but then his goddaughter Esme got wind of the plan.

“She threatened she’d never speak to me again if I changed it – so I left it the way it was, I’m glad I did.”

Lightbody’s family shaped the album in a much more personal way on Soon, a heartbreaking message to Lightbody’s father, who is suffering from dementia.

It’s accompanied by a tender video in which father and son sit together and watch old home movies, an experience that was as moving to film as it is to watch.

“It was just a very sweet series of moments,” he says. “I’d be singing the song and he’d reach over and go, ‘That’s lovely, that is. That’s a lovely song.'”

He continues: “His condition, of course, is devastating but within it, there are these moments of humour.

“Sometimes he’ll say, ‘What are we doing later?’ and mum will say, ‘I’ve already told you, we’re doing this’. And then my dad says, ‘You do know I’ve got dementia!’

“So he’s very aware of it in a lot of ways. He makes jokes about it. He’s doing his best.”

Like a lot of the songs on Wildness, Soon offers hope and acceptance in the place of melancholy and self-pity. It’s no surprise to learn the Lightbody family motto, displayed proudly on the walls of the singer’s childhood home, is Clarior E Tenebris – light after the dark.

“That motto definitely sunk in,” says the star. “I thought about it a lot, even in the times when I did not feel there was going to be brightness after the darkness.

“But that was really the crux of the whole thing, opening up yourself and letting the light shine in. Which is really what the whole record’s about in a lot of ways.”

Later this summer, the band will get to play the songs in stadiums across the US, where they’re supporting Ed Sheeran on his gargantuan ÷ tour.

The ginger wonder is repaying a favour, after Snow Patrol took him out on tour at the start of his career – although there might be some tension over an unfulfilled promise.

“When we first met, Ed had just started getting some tattoos,” the singer explains. “And I said, ‘The only tattoo I’ve ever thought of getting is a line from a Bon Iver song.’

“Before I could say anything else, Ed went, ‘Everything that happens is from now on,’ and I was like, ‘Yes! That’s the line!’

“And then Ed went and got [Bon Iver frontman] Justin Vernon to write it down. He sent it to me and said, ‘I’m getting this done as a tattoo tomorrow, go and get yours done, too’. But I chickened out.

“I’ve never had a tattoo. But I might get it done one day. I probably should, to complete the story.”

In the seven years since then, Ed has become one of the world’s most popular stars – but he still has some way to go before he can beat the success of Snow Patrol’s biggest song, Chasing Cars, which has spent 166 weeks on the UK chart.

That makes it the second most successful song of the 2000s, after The Killers’ Mr Brightside.

“I didn’t know that stat,” marvels Lightbody. “I’m pretty flabbergasted by it.

“I still have a really deep relationship to that song. The way it unifies an audience is the thing I most cherish about it.

“It’s a beautiful moment every time you play it.”

The singer once declared that the best song ever written in Northern Ireland was The Teddy Bears Picnic… But based on its chart performance, I wonder whether Chasing Cars can rightfully claim the title?

“Bloody hell! Did I really say that?” laughs Lightbody. “No. The greatest song ever written in Northern Ireland is Teenage Kicks. Or about 25 Van Morrison songs.

“Although Teddy Bear’s Picnic is a cracking tune….” 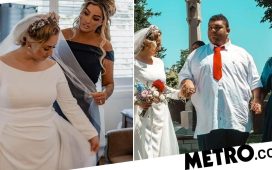 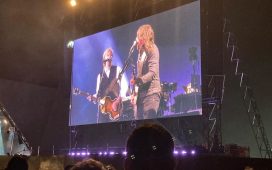