NEWSCABAL > education > When will schools reopen after lockdown?
education

When will schools reopen after lockdown?


The Prime Minister has announced English schools and colleges will close as part of a new national lockdown.

Boris Johnson said primary and secondary schools will close immediately and move to online learning for all pupils, except children of key workers and the most vulnerable.

Early years settings such as nurseries and childminders can remain open, and existing childcare bubbles will be allowed to stay in place.

On Monday, another 58,784 Covid cases were recorded and 407 more people died with the virus, according to government data.

But when will schools and colleges reopen?

The PM said he hopes to reopen schools in the middle of next month.

He said: ‘Then I hope we can steadily move out of lockdown, reopening schools after the February half-term and starting, cautiously, to move regions down the tiers.’

Johnson announced schools would close despite repeated promises they would open as planned after the Christmas holidays.

Bryony Baynes, headteacher of Kempsey Primary School in Worcestershire, said she is angered about the lack of notice given to parents.

She added: ‘I really cannot believe that they think it’s acceptable to drop a bombshell like this on parents with no notice.

‘Once again they are making this catastrophic U-turn without allowing parents to put anything into place.’

Johnson did not provide details on what would be done for students set to take exams this year.

He said the closure of schools means it is ‘not possible or fair’ for all exams to go ahead this summer as normal.

Can you solve it? Irresistibly small and intolerably cute

Schools could stay shut until May as ‘ministers rethink February restart’ 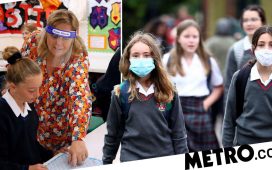 Does true grit just belong in movies? Or can we teach it to our children? | Yvonne Roberts