It was a tragedy that nobody saw coming. But by the time it was over, it left five people dead, scores injured, some of them critically, 25 cars burnt and one building structure in complete ruins.

There is, perhaps, no better way to describe the ruins and destruction caused by the liquefied petroleum tanker explosion that shook Mobolaji Johnson Way, Ikeja, Lagos, to its foundation on Thursday night, precisely at about 11p.m.  Said to have been caused by a leaking valve of a moving tanker, it ignited a huge fireball that practically licked up every combustible item on its path. Affected mostly are business owners and employees at Ogun State Private Investment Corporation (OPIC) Plaza, Ikeja. 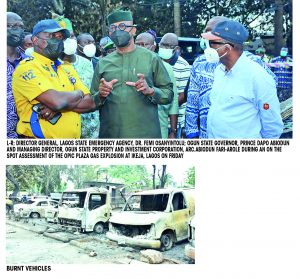 A vulcanizer who lost two cars given to him to sell to the inferno, became the object of pity of sympathizers when he lamented that he wa finished as he didn’t know what to do or to tell the owners.

Many hours later, the smoldering scene still points to a tragedy of immense proportion. Initial report claimed that 13 people, nine males, four females, sustained various degrees of burns in the incident, which occurred in front of the popular Sheraton Hotel, Ikeja. The Acting Zonal Coordinator, South West Zonal Office of the National Emergency Management Agency (NEMA), Mr. Ibrahim Farinloye, informed newsmen that three bodies were initially recovered from the scene of the explosion. But the number later increased to five.

The affected victims are being attended to at the Lagos State University Teaching Hospital (LASUTH), he added.  “Only four of the critically injured were transferred to Burn Centre, General Hospital Gbagada at about 0230hours today. The yet-to-be-identified bodies were recovered from the generator house of OPIC Plaza and the restaurant,” he said. “Search-and-rescue is still ongoing at the collapsed buildings.”

He explained that the LPG tanker exploded at about 10.32 hours. The resulting fire travelled with the wind to the premises of Ogun State Property Investment Company (OPIC) Plaza, besides Sheraton Hotel and housing different commercial outfits, including the Chinese Restaurant.

Providing an update on the incident, he said: “The fire was put out at about 0030 hours following concerted efforts by five fire trucks from Lagos State Fire Service and two from LASEMA Response Unit. Preliminary assessment on vehicles damaged indicated that about 25 were burnt. Comprehensive post-disaster assessment on the extent of general damages would be done later. The Commissioner of Police, Lagos Command, Hakeem Odumosu was at hand and took charge of crowd control and normalised the situation for a successful operation. NEMA, LASTMA, State Fire Service, FRSC and NSCDC were at the scene.”

Earlier, the inferno was reported to have led to the quick evacuation of all guests at Sheraton Hotel. It later led to a heavy traffic congestion that grounded movements on all entrances/exits routes to Ikeja and trapped motorists for several hours. Some of the affected motorists, who made short videos of the incident, blamed the slow response by emergency services for the escalation of the inferno. The videos shared on social platforms showed aggrieved onlookers lamenting how long it took rescuers – some claimed it was more than 30 minutes – to get to the scene of the fire incident.

The Lagos State Emergency Management Agency (LASEMA), in a short message, said all emergency workers were at the scene working to contain the situation. The Director General (DG), Dr. Femi Oke-Osanyintolu said that the information gathered at the scene revealed that the fire started as a result of explosion while the gas tanker was moving inward Ikeja.

Oscar Odion, a dispatch rider with Sandra Logistics and an eyewitness of the ensuing horror, said that he was on his way back from the day’s work when he saw the fire. Cries of agony rent the air as fire fighters battled hard against the enraging and spreading flame. Smokes and fire billowed from the bodies of people caught in the resultant melee.  Some tried to escape only to get crushed by escaping motorists.

His account: “It happened around 11 pm yesterday while I was on my way home. I was riding with a friend when we saw the fire. We saw people struggling to escape. A child lay abandoned on the floor. I watched as the building collapsed. We tried to curtail the spread of the fire before fire service people arrived. A guy tried to rescue a victim trapped in the fire.  Another guy saved from the fire got knocked down by a vehicle on motion. We mainly engaged ourselves in fetching water from the tap in the compound, because fire service men from the first fire service truck that arrived the scene claimed not to have water. As the fire spread we could not stand and do nothing.”

Oluwaseun Olowaremi Peters, a driver with Oasis Supermarket, was not only an eyewitness but much more importantly a survivor of the inferno. When our reporter met him he was in a sober mood and busy quietly telling few people around him how he narrowly escaped death. Donning a pair of oversized black trousers and with his hands folded in praying position, to signify his gratitude to God, he said:

“I wanted to watch the football match. But on realizing that the bet9ja shop had closed, I went back to my car to rest my head and listen to the commentary of the game. But not long after I woke up from sleep to have my night prayer, because I had decided not to go home, I heard a big bang. It was like the sound of a thunder. Everywhere was covered with acrid smoke so much that I could not see. It was painful to the eyes. When I realized it was not raining, I quickly ran out.

“As I was trying to escape, my trousers got caught up somewhere. I tore it and jumped outside as I saw the enraging fire coming towards me. I thank God that my car’s door opened at once because if it had not, I would have been trapped in the fire. When I jumped from the fence, I landed inside a gas storage tank. All my body became cold up till my toenails. I was immobilized; I could not move. All the same I mustered strength and escaped.”

Muritala Mudasiru, a vulcanizer who lost two cars and two machines to the inferno, was being consoled by friends as he stood behind the yellow demarcating tape, furtively gazing into space.

“I was here till 10 pm before I left for home,” he explained. “I first got the call that a gas trailer had spoiled and released some gas. The fire came from the New China Restaurant. I lost two vulcanizing machines and two cars, Mazda and Toyota Corolla, kept in my custody for sale.”

A little tension rose up yesterday between a team of police officers and some of the victims when the security officers tried to clear and cordon off the scene. One of the victims who gave his name as Niyi decried the police’s attempt to treat him like a miscreant and vehemently objected to it.

The State Commissioner for Special Duties and Intergovernmental Relations, Mr Tayo Bamgbose-Martins issued the condolence message during an assessment visit to the scene of the fire incident

Mr Bamgbose-Martins who was in company of his Physical Planning counterpart, Mr Idris Salako, the Commissioner of Police and other key government officials described the incident as very devastating. He assured that due diligence would be done and  necessary measures implemented to prevent a reoccurrence.

Director-General of the State Emergency Management Agency, LASEMA, Dr Femi Oke-Osanyintolu  stated  that instead of milling round scenes of emergencies and sending wrong or conflicting information on social media, residents should always report incidents via the 112 and 767 toll free emergency numbers.

The LASEMA DG disclosed that the carcass of the gas tanker and truck had been evacuated and forensic evidence would be gathered to ascertain whether the recommended safety measures were violated.