'We're all weeping with you, Ma'am': British press bids farewell to Philip 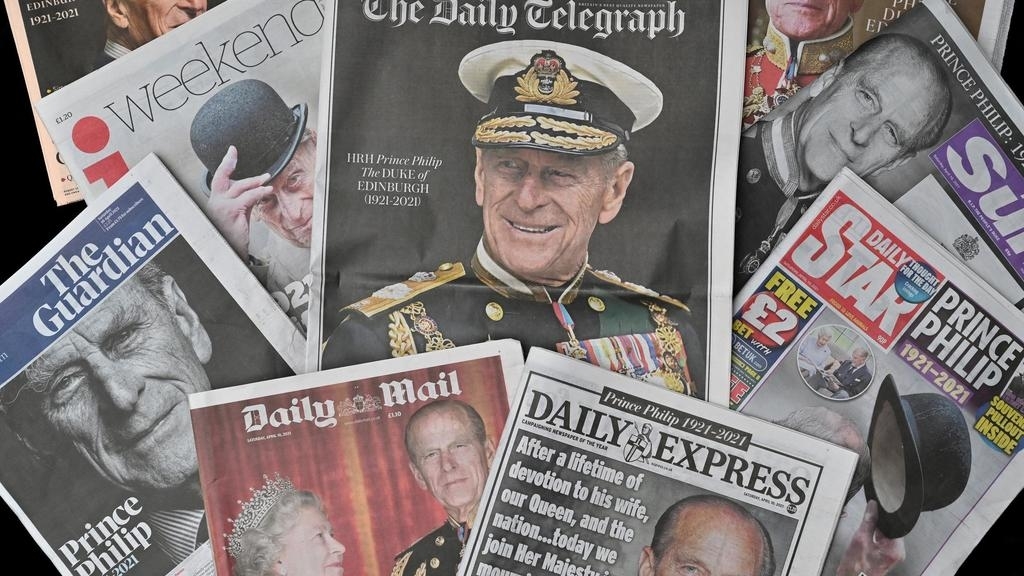 Britain’s famously partisan press were unusually united Saturday, as they led tributes to Prince Philip, husband of Queen Elizabeth II, the day after his death at the age of 99.

Most focused on the importance of their seven-decade union to the monarch, with the Times and the Guardian calling him the queen‘s “steadfast support”, while the Daily Star called him “her rock” and the “man who made Lilibet (his pet name for the queen) laugh”.

Scotland‘s Press and Journal bid “Farewell to the ‘royal rock'” too, alongside an old photo of a younger royal couple with their children wearing kilts; and the Times’ Scottish edition carried an old quote from the queen, “my strength and stay”.

Tabloids the Daily Mirror and the Daily Mail, normally found on diametrically opposite ends of the political spectrum, saw a rare convergence of front pages, both running full page pictures of the queen and Philip with the headlines “Farewell, my beloved,” and “Goodbye, my beloved” respectively.

The Mirror reported that the Duke of Edinburgh’s death had “united (the royal family) in grief”, with Prince Harry putting aside recent tensions “as he scrambles to return home” for the funeral.

A bumper issue Daily Mail contained an account of the duke’s final days, “the sun on his face and a rug on his lap… with his ‘Lilibet'”.

“We’re all weeping with you, Ma’am,” ran the Sun’s headline, paired with a picture of the couple on their wedding day, as well as more recent photos of the two.

“What an extraordinary life. What epic and exemplary service he gave to his Queen and country. What a character. What a joker,” began its lead article.

The duke’s “life of service” was feted by the Evening Standard, and the Daily Telegraph sported a full-page photograph of Philip in military uniform, along with articles commending the prince as “Britain’s most loyal servant” and “guided by love and duty.”

The i weekend featured a photo of Philip doffing a bowler hat, taken at his last solo public engagement in 2017, with the headline “A life of duty”.

The Daily Express called Philip “the indomitable Duke”, and echoing the palace’s announcement of his death, said the nation joined the queen in “deep sorrow”.

“With restrictions still in place amid the Covid-19 outbreak, the public elements of the final farewell will not be able to take place in their original form,” it noted.

The Financial Times was one of the few mainstream titles to not dedicate its entire front page to the story, saving space for articles on the French wine harvest and Greensill Capital.

While most steered clear of controversy, the far-left Morning Star, well known for its opposition to the monarchy, ran an editorial titled “Philip personified the nonsensical conceits of an ersatz patriotism”.