Fostering children is a big responsibility, but it can also be hugely rewarding.

That was the experience of one American mum named Elizabeth and her husband Ed, who chose to foster two young boys after welcoming seven children of their own.

Elizabeth and Ed fostered boys named Bentley and Lincoln – who were 18 months and six months old respectively at the time – after the kids had already been in two foster homes, and the couple were keen to make them part of their family.

Speaking to Kidspot, Elizabeth said: “The oldest one was non-verbal and had other challenges and the younger one had gone through three weeks of withdrawal from heroin in the NICU after birth.

“The parents had lost all visitation rights by the time we got the boys so we knew right away that they would likely be available to adopt.”

The mum explained she and Ed had originally only wanted three children, but felt as though “someone was missing” from their family so ended up with seven biological children – but it still wasn’t enough.

Elizabeth’s last pregnancy was so tough on her body that she was advised not to have any more children, but with a hole still left in their family, the couple decided to become foster parents.

And when Elizabeth met Bentley and Lincoln, she knew they were meant to be her kids, but there was one problem – she didn’t like their names.

She said: “The boys were named after cars, and we felt that it was very dehumanising to be named after objects to be used.”

The mum got the approval of the boys’ birth mother, and discussed the change with her sons (stock image)
(

After fostering the boys for 18 months, Elizabeth and Ed fully adopted them both into their family – and immediately changed their names.

The mum explained: “Kolbe, formerly Bentley, is named after St Maximillian Kolbe. I did not realise, but he is the patron saint of drug addicts, so it seems very fitting as their biological family struggles with drug addiction.

“Justin, formerly Lincoln, means upright and righteous and what we would hope for him to be when he grows into a man.”

Elizabeth also insisted she didn’t take the decision to change the boys’ names “lightly”, and spoke to both youngsters about the change before she went through with her plans.

She said: “We talked about it in the context of their adoption and how their last names would be changing since they would now be our forever children.

“They were very excited about the entire process, and it was a seamless transition adjusting to their new names.”

The mum even got in touch with their biological mother, who she says found the change difficult to begin with but quickly came around to the new names.

Elizabeth said: “She said she was upset at first when she found out about the change.

“However, after hearing why we made the change she understands and loves the names that we chose for them.

“I had the opportunity to talk to her about the name change, about what she was going through when the kids were taken away, and how we saw things before we got to know her.”

The conversation between Elizabeth and the boys’ biological mother went so well that the mum asked Elizabeth and Ed to also take in her daughter Charlee, who was born a year after the boys were adopted.

Charlee was placed into the couple’s care at two days old, and was officially adopted a year later – when her name was also changed to Charlotte.

Mum-of-10 Elizabeth explained: “Charlotte was an infant at the time we made her change, but we will have that conversation when she gets older and asks about the adoption.

“We are very open, in age-appropriate ways, with the children about how they came to our family and include their biological family as much as possible in their lives.

“In our case, we did not see the biological family as the enemy, and fortunately for us, they did not view us that way either.

“I hope that the children we have in common will be proud of us all and how we tried to work things out as best as we could for their benefit. It hasn’t always been easy – but the effort is always worth it.” 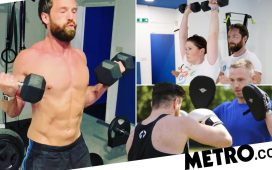