Scottish superstar Lewis Capaldi was given a music lesson of his own by a young fan before his homecoming gig last night.

Layla Cooke was teaching the Whitburn musician to sing Happy Birthday in British Sign Language (BSL) in a bid to raise awareness and help others who are hard of hearing.

The teenager, who turned 14 yesterday, was invited backstage before Lewis’s Summer Sessions gig in Edinburgh and was delighted when he wanted to sing her Happy Birthday.

Layla, who is hard of hearing, has been learning BSL for over a year since her hearing loss deteriorated.

Lewis picked up the language in a few minutes and impressed Layla with how much of a perfectionist he was.

She told the Daily Record: “He had to have it 100 per cent right.

“Lewis was so nice and I felt amazing. I was super happy and meeting him was amazing like such a kind and genuine guy, he was fantastic.

“And it was even more great that it was on my birthday.”

As a special birthday treat Layla, from Fife, was given a t-shirt, funky glasses and a wristband from the singer.

The high school student, who also has anxiety, has been making her own videos signing along to songs from the hit singer and other musicians.

She hopes to raise awareness of sign language and mental health in teenagers, and has set up her own social media pages to help others. 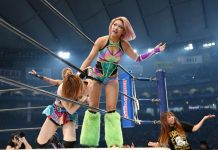 Watch NBC News NOW's Can You Hear Us Now? Virtual Discussion on Race in America