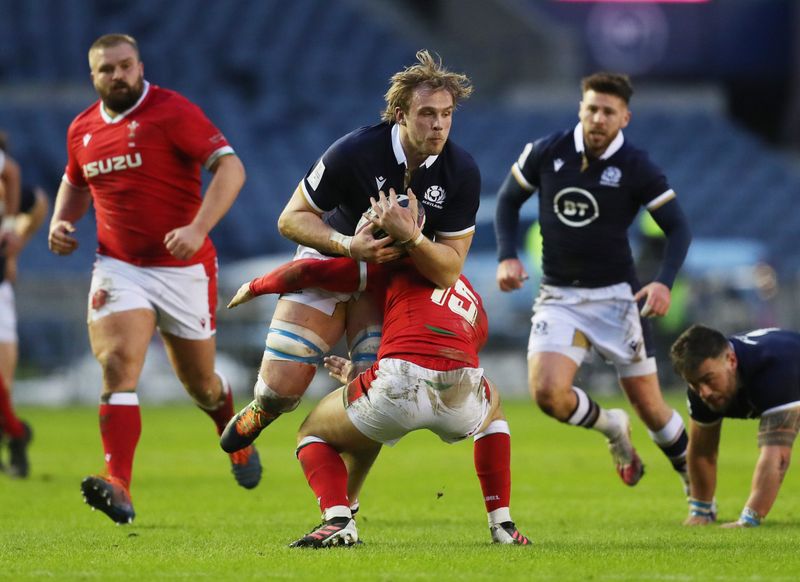 EDINBURGH (Reuters) – Wales roared back from a 17-3 halftime deficit to complete a remarkable 25-24 Six Nations win over 14-man Scotland on Saturday, in a crackling encounter that saw momentum shift time and again.

Winger Darcy Graham darted onto a clever chip from Ali Price to score the first try, before the effervescent captain Stuart Hogg collected his own kick through to add another as Scotland showcased their inventive, incisive attack.

After barely firing a shot in the first period, however, Wales fought back with tries from Louis Rees-Zammit and Liam Williams (NYSE:), both wingers capping off deft handling down the backline. Prop Wyn Jones thudded over after a driving maul to score a third, as Scotland began to infringe at the breakdown.

A 54th minute red card for Zander Fagerson for an illegal clearout appeared to seal Scotland’s fate, but Hogg reclaimed the lead for the home side with yet another brilliant score.

The last laugh belonged to Wales in a breathless finale, however, as Rees-Zammit scored his second try via his own brilliant chip-and-chase.

“We can be pleased with the character we showed, but for large parts of that game we were disappointing,” said Wales captain Alun Wyn Jones.

Player of the match Rees-Zammit, 20, justified the hype surrounding his rapid rise to the national side not only with scorching breaks but an incredible late spiralled touchfinder.

Scotland, who opened the tournament in such style with a surprise 11-6 win over the much-fancied England, were left regretting poor discipline and several spurned chances to kick points late on.

“We are bitterly disappointed, for large parts of the game we were in control of it,” Hogg said after a game in which he showed world-class pace and kicking precision.

The result marks further progress for Wales coach Wayne Pivac, who came into the tournament under pressure after a string of defeats and a sense the side was drifting from the ferocious defense-led style instilled by predecessor Warren Gatland.

Table-topping Wales will have the chance to make it three from three when they face England at home on Feb. 27, while Scotland face France away the next day.