A FURIOUS Vladimir Putin refused to touch a charge sheet accusing his spies of interfering in the US election in a fiery interview yesterday.

The Russian president looked coldly at the document before gesturing to Fox News’ Chris Wallace to place it on the table between them.

Wallace had told him the paper listed allegations that Russia hacked into Democratic party computers, stole information and spread it to “disrupt the American election”.

Putin, who yesterday told Trump he wanted him to win, giggled like a schoolboy as the seasoned journalist read through the list of very serious accusations.

He eventually tells Wallace: “Russia, as a state, has never interfered in the internal affairs of the United States.”

In the same fiery interview, the former KGB agent said claims he meddled in the election were “utterly ridiculous” and also denied his country was behind the Novichock poisonings in Amesbury.

Putin On The Spot – highlights from his Fox interview

On the UK nerve agent attacks

“We would like to get some sort of document or evidence about it…These are ungrounded accusations.”

On claims he meddled with the US elections

On claims he has dirt on Trump

“I may come as rude, but before he announced that he will run for presidency, he was of no interest for us.”

On the deaths of his political enemies

“Has Kennedy been killed in Russia or in the United States?”

“I’ve never even heard the last names of these persons.”

On his tough guy image

On the charge sheet accusing his spies of meddling

“Russia, as a state, has never interfered in the internal af fairs of the United States.”

His comments came after Trump hailed ‘open and deeply productive’ talks with the Russian President following their meeting in Helsinki and insisted Moscow had not interfered with the 2016 US election.

Putin to Wallace: “Do you really believe that someone acting from the Russian territory could have influenced the United States and influenced the choice of millions of Americans?”

He went on to deny Russian spooks were behind nerve agent attacks on British soil that targeted an ex-KGB spy in March, and left 44-year-old Dawn Sturgess, dead last month.

Replying in Russian via an interpreter Putin told Fox: “We would like to get some sort of document or evidence about it. But no one gives it to us.”

“These are ungrounded accusations. I’ve recently heard that two more people suffered from the same nerve agent that is called Novichock.

“I’ve never even heard the last names of these persons. Who are they?” he said, hours after his summit with President Trump in Helsinki, Finland.

The US president has been criticised for buddying up to the Russian, with one former CIA boss branding him “treasonous” and some going as far as to suggest Putin had some kind of leverage over him.

House Democratic Leader Nancy Pelosi of California claimed Trump’s “weakness in front of Putin… proves that the Russians have something on the president, personally, financially or politically”.

Vladimir Putin looks like ‘a moody teen who’s been dragged to his nan’s when he met Trump’, body language expert reveals

He added: “I don’t want to insult President Trump when I say this, and I may come as rude, but before he announced that he will run for presidency, he was of no interest for us.

“Unlike the United States, we don’t do this. We don’t have enough resources.”

Pressed on why his political enemies have been attacked, Putin quipped: “Well, first of all, all of us have plenty of political

“All of us have our own set of domestic problems.”

During the interview, Putin also pushed back against the image of him as a strongman, an autocrat.

A version of this story originally appeared on Fox News. 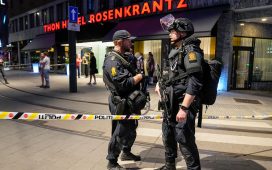