Virtual participation in the House of Commons debates should come to an end when final Covid-19 restrictions are relaxed, MPs have said.

The cross-party Procedure Committee said the temporary “hybrid” proceedings should be extended until stage four of the Government’s roadmap for easing restrictions, which is earmarked for June 21.

But in a report, they said the House should ultimately revert to “all aspects of its pre-pandemic practice and procedure” after that point.

The MPs did, however, recommend that officials are given the scope to further develop the hybrid proceedings allowing virtual and in-person participation in case it is needed in the future, such as during the Palace of Westminster’s restoration works.

Committee chair Karen Bradley MP said: “The Government has set out a cautious and steady easing of lockdown restrictions, and the House of Commons Commission has set out a similar roadmap for the House at an administrative level.

“This committee’s recommendations for a return to something approaching ‘normality’ are consistent with both the commission and the Government, but the ultimate decision must be made by all MPs.”

Commons Leader Jacob Rees-Mogg has previously suggested MPs should fully return on a similar timetable, saying “we can’t be behind nightclubs”, which are due to reopen in stage four. 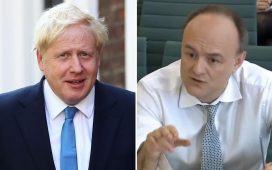