NEWSCABAL
Home » VIDEO: Those who macheted me abused me for testifying before EndSARS panel -Witness
africa

VIDEO: Those who macheted me abused me for testifying before EndSARS panel -Witness

One of the witnesses who testified before the Lagos State Judicial Panel of Inquiry on Restitution for Victims of SARS Related Abuses and other matters, Kamsi Ochuko, has narrated how she was attacked by unknown men.

In a video obtained by our correspondent, Comrade Kamsi, as she is popularly called, lamented that she was macheted and brutalised like a thief.

While displaying the injuries she sustained, the witness said that the attackers abused her for testifying before the panel.

According to her, she narrowly escaped being killed.

Our correspondent gathered that the incident happened on Sunday at Crown Estate bus stop, Sangotedo, near Shoprite, Lekki.

She said, “This is me Kamsi. Last night, I was attacked by three guys (men) whom I thought were passers-by. I was standing at the bus stop waiting for a vehicle. Only for one of them to point a torchlight at my face, before pouncing on me with dangerous objects. They said my crime was because I testified before the panel.

“They said if they kill me, there would be no way for me to continue agitating for justice. I told them that I don’t know what they were talking about.

“They started hitting me. See all my body, back, leg, hand badly injured. They cut me like I am a thief. I survived by the grace of God because I almost died at that bus stop.”

One of the #EndSARS protesters lawyers, Adesina Ogunlana, had told The PUNCH that many families and witnesses were scared to testify publicly before the panel.

While commending Kamsi as one of the  witnesses, Ogunlana said more than nine protesters were killed at the Lekki tollgate on October 20, 2020.

He said, “I give kudos to the teams defending the protesters. We had gallant ladies like Kamsi, Dabiri, and others that came up despite the intimidation. There was a fair hearing.

“They are more than nine but the panel worked with those with concrete evidence.

“Some of the eyewitnesses and relatives were scared to speak. It was hectic to get people to testify. some thought they will be killed.”

According to the report submitted by the panel, no fewer than nine #EndSARS protesters were killed at the Lekki tollgate on October 20, 2020, while four others were presumed dead.

The report listed 48 names as those who were casualties of the Lekki incident of October 20, 2020.

Among the 48 casualties listed, 24 sustained gunshot injuries, while 15 others were assaulted by soldiers and police.

The panel also noted that 96 other corpses were presented by a Forensic Pathologist of the Lagos State University Teaching Hospital, Professor John Obafunwa, but were rejected over lack of concrete evidence linking the cause of their deaths to the Lekki tollgate. 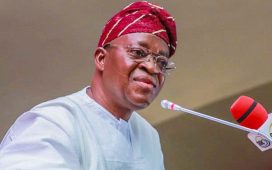