PET Vet Sean McCormack has urged owners to be wary of giving their animals medication and treats containing CBD oil.

Last week Katie Price spoke out after she was wrongly told it was OK to give her pup Rolo CBD oil.

Rolo died in July after falling asleep under a chair and suffocating.

Mum-of-five Katie has since been told the CBD oil she gave him might have made him drowsy and seek out a quiet space.

CBD – or cannabidiol – comes from hemp, but does not contain tetrahydrocannabinol, the compound that makes people high.

CBD products are available as drops, treats and chews online.

But CBD oil has not been approved by the Veterinary Medicines Directorate or Food Standards Agency.

Sean warned readers: “Do not give it to your animals.

“It isn’t licensed in pets and it is illegal for a reason.

“Some pet owners want to go down the holistic route and don’t want to visit a vet. But we don’t know how safe some of these things are.

“How do you know what dose to give of CBD when it isn’t licensed? You could cause serious harm.

“You should always speak to your vet first.” 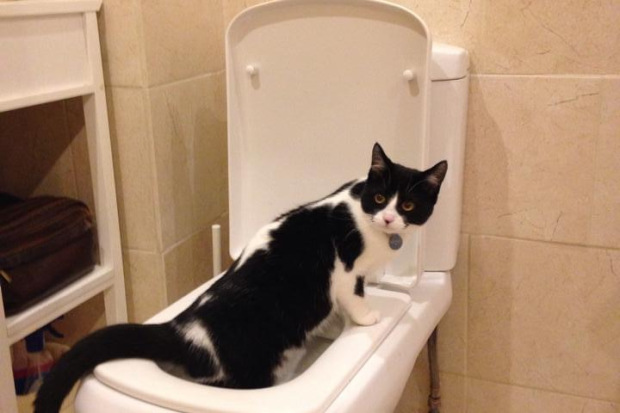 MEET Meekah – the six-year-old cat that is toilet trained.

Just months after the feline was rehomed in 2014, owner Rachael Doidge started hearing weird noises emanating from the bathroom.

Rachael, 28, from Dumfries, who lives with her fiancé Dave, said: “We didn’t train her. It was more a ‘caught in the act’ scenario.

“I’d say it’s down to her being exceptionally smart – she’s just copied us.”

The couple, who are expecting a baby boy next month, found it hilarious and Rachael shared a photo on Facebook.

She said: “In terms of potty training our baby, I’m sure Meekah will know what to do when we put a potty down – I’ve no doubt she’ll copy our baby.”

HE is on a mission to help our pets  – and is here to answer YOUR questions. Sean, who is the head vet at tailored pet food firm tails.com, has helped with owners’ queries for ten years.

He says: “If your pet is acting funny or is under the weather, or you want to know about nutrition or exercise, just ask. I can help keep pets happy and healthy.”

Q) WHILE we were in the pub last weekend, my dog Patch jumped on the table and started drinking from my pint of cider.

He only had a couple of slurps before we grabbed him and got him down.

He was quite cuddly for the rest of the day but seems back to his old self. Might he have been tipsy?

Sean says: I get a bit cuddly with a few ciders onboard too, Tom. If Patch is a small dog then a few slurps of cider might be the same as a pint to you or I, so he could have been tipsy.

But remember, alcohol is a toxin and affects dogs even more seriously than us, so you need to make sure he remains teetotal in future.

He was poorly for a couple of months. Holly didn’t really go near him in the last week, as if she knew something was wrong.

She was with us when he went and came over and touched noses as though to say goodbye.

She now seems a different dog. She only plays sometimes, doesn’t sit with us and is off her food slightly.

Sean says: Oh poor Holly. I often get asked if dogs can grieve, and the answer is, “Yes, of course”.

She’s lost her best buddy, so there’s going to be an emotional impact and a period of adjustment.

The good news is that dogs seem to bounce back from grief sooner than we might. My first suggestion is to have patience and give her time.

Second is to dial up time spent doing all the things she loves. Get her out on walks with her doggy friends, play games, spoil her with treats (but careful of her waistline) and when she is upbeat, ramp up that energy. With time, she’ll get her mojo back.

You can never replace a Buster but many dogs in rescue centres would love to be Holly’s new friend!

ZOE, my cat, does a really loud growl or squeal when she is annoyed, but when she is happy I can barely hear her purring.

She is generally very happy. Why are her vocal expressions so different?

Sean says: Cats are nothing if not individual. Each one has their own quirks and habits for us to figure out.

Vocal expressions are often a source of confusion.

Purring at any volume usually says your cat is happy but some cats will also purr when they are in pain or anxious. We think it might be because it releases feel-good chemicals in the brain.

Some cats growl, squeal or howl, some cats are totally silent. Zoe is just Zoe, and it sounds like you know her moods well.

Q) MY house rabbit Thumper is more like a dog.

He follows me around all the time grunting and jumps in the air and goes crazy when I feed him. Could it be because he hasn’t been neutered?

Rabbits are very social creatures, so I always recommend a rabbit friend.

I also always recommend males are neutered, as it’s very frustrating for him to have all his equipment and no outlet to use it.

GIVE your dog a toy with a difference from the paw-litical selection at Pets Hate Toys (pethatestoys.com).

We have six £40 vouchers for the site up for grabs – so you can buy some for your four-legged friend.

For a chance to win one, email PAWLITICAL to sundaypets@the-sun.co.uk by October 11.