Venus may have been habitable billions of years ago, with vast oceans made of liquid water possibly supporting life.

Gravity from the sun pulled on the water and slowed down the rotation of the planet until greenhouse gases formed thick clouds and heated the planet.

It underwent rapid change and is currently one of the hottest in the solar system, with temperatures topping 450°C (840°F).

Oceans evaporated as the planet warmed, causing it to spin progressively slower, until it reached its current lethargic pace of one rotation every 243 days. 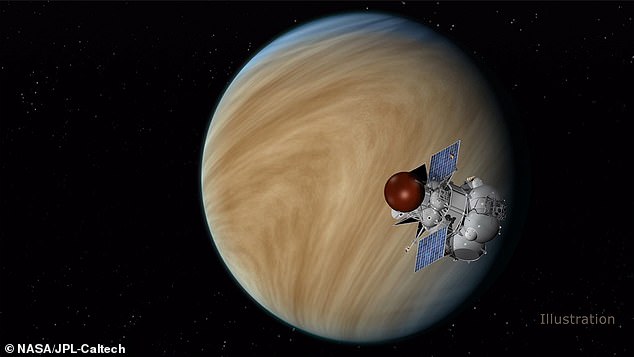 Venus (artist’s impression, pictured) changed rapidly after spinning rapidly and having oceans of liquid water and is currently one of the hottest in the solar system, with temperatures topping 450°C (840°F)

Venus has the longest days of any planet in the solar system but in its infancy this may have not been the case.

Experts now think it was likely similar to Earth.

Water on any celestial body is heavily influenced by the gravitational pull of nearby planets, stars or moons.

For example, Earth’s tides are caused by the moon’s presence.

Venus however, had a far more significant body interfering with its tides – the sun.

The tides of Venus would have been far stronger for this reason and the pull then was responsible for slowing down the planet’s spin.

The researchers calculated that it could have slowed by as much as five days every million years. 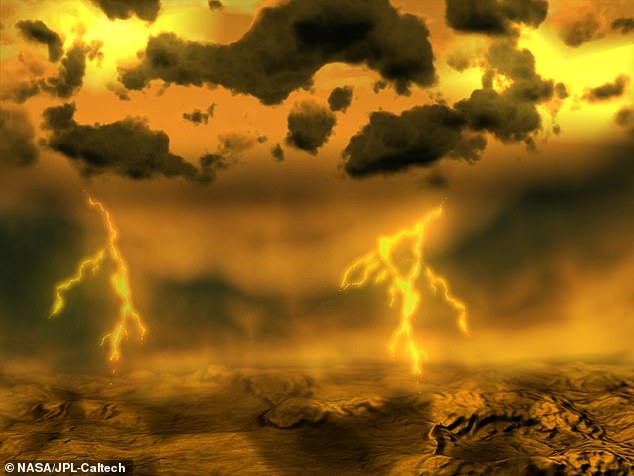 Astronomers extrapolated the data and say it would have taken less than 50 million years to reach its current rate.

The findings were presented at the Lunar and Planetary Science Conference in Texas.

These clouds were responsible for its rapid warming as greenhouse gases trapped heat.

This completely changes the planet, making it into a furnace and creating the hottest planet in the solar system where the existence of life is almost impossible.

WHAT DO WE KNOW ABOUT VENUS’ ATMOSPHERE?

The atmosphere has many layers with different temperatures.

At the level where the clouds are, about 30 miles (50 km) up from the surface, it’s about the same temperature as on the surface of the Earth.

As Venus moves forward in its solar orbit while slowly rotating backwards on its axis, the top level of clouds zips around the planet every four Earth days.

They are driven by hurricane-force winds travelling at about 224 miles (360 km) per hour.

Speeds within the clouds decrease with cloud height, and at the surface are estimated to be just a few miles (km) per hour.

On the ground, it would look like a very hazy, overcast day on Earth and the atmosphere is so heavy it would feel like you were one mile (1.6km) deep underwater.

Early Britons ate every part of horse almost 500,000 years ago