The zone beneath the Ural Mountains taken over by projects related to the New Silk Road. The local population revolts but the authorities bargain in secret. The Council of Europe and the UN Commissioner for Human Rights criticize the conditions imposed on workers.

Moscow (AsiaNews) – A large-scale Chinese initiative is underway to integrate into the economy of the area beyond the Volga River, close to the Ural Mountains. The attempt is part of the Belt and Road Initiative, the “New Silk Road” which is continuously being reformulated according because of the often harsh reactions of local populations.

On April 20, in the House of Culture of the agricultural village of Ryndinsk, in the province of Tsivilsk in Chuvash, a Russian region close to the European side of the Urals a vote was held among operators in the sector to transfer the territories of the area into the “industrial” category.

The goal was the realization of agricultural projects with a high rate of investment. In reality, the discussion showed that neither the investors nor the Chuvash authorities had any plans ready: they were instead trying to pass the “Udmurtia project”, another Russian region on the Asian side of the Urals, where investors are Chinese companies.

Already a year ago, local authorities had tried to rent large agricultural plots in the Tsivilsk province to Chinese investors, but the local inhabitants had declared their opposition, and the issue had run aground. Many fear that the Chinese will make the land available to people who are beyond control. In fact, the authorities have not shed any light on the ownership of the companies funded by money from Beijing investors.

In a comment to Idel.Realii, Oleg Semenov, communist deputy of the provincial council of Tsivilsk, observes that to date no deputy is aware of the details of the project, which is presented as “a state plan, inserted in the republican budget of Chuvashia”. “We only know that the plan is called the ‘Udmurtia Agricultural Complex’, but we don’t know who thought it up, what it contains, or how it applies to the Chuvashians,” Semenov emphasized.

The chairman of the Tsivilsk council, Veronika Fedorova, assured that “only local Chuvash investors will be involved in the project presented, who have no relationship with Chinese investors”. In reality, for some years the Chuvash authorities have been collaborating in secret with the Chinese, clashing with suspicious locals.

Some Chinese investors have already left the region, which is considered “toxic” for investment, and moved to adjacent regions, such as the republic of Tatarstan. The president of Chuvashia himself, Oleg Nikolaev, defined the development prospects of “Chinese projects” as “somewhat nebulous”.

The Chinese attempts have already aroused reactions from the Council of Europe and the UN Commissioner for Human Rights for the conditions imposed on workers in the Samara region, also beyond the Volga. However, the projects seem destined to expand, as a result of the agreements between President Vladimir Putin and his counterpart Xi Jinping.

Betting on High-Yield Stocks Emerges as Winning Strategy in Asia 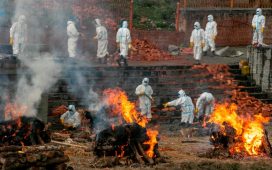 Beyond India, a growing number of Asian countries are being ravaged by fresh coronavirus waves