Vaccination rolls out across Europe, but anger remains over late start


Until 8 November, terminal C of Tegel airport used to be where Berliners took off for weekend breaks across the Schengen area. From Sunday, the disused runway hopes to see the start of a journey towards a more permanent destination: herd immunity to Covid-19 by mass vaccination. Departure: delayed. Arrival time: unclear.

From 8.30am, Tegel will serve as a control centre for 60 minivans filled with four-person mobile “vaccination teams” who will pick up Berlin’s first 18,000 doses of the Pfizer/BioNTech vaccine from a secret location, then administer them to vulnerable people in care homes across the city, initially prioritising dementia sufferers who struggle to adhere to social distancing.

The starting gun will be fired in several European countries at the same time: the 12.5 million doses of the Pfizer/BioNTech vaccine that will arrive in EU countries before the end of this year are part of a 300-million dose bulk order signed by the European Commission.

As a result, vaccination will start on 27 and 28 December not just in the economic powerhouses of Germany or France, who could theoretically have outbid smaller competitors, but also in Luxembourg, Belgium, Spain, Austria and Bulgaria. The Republic of Ireland will begin its process on Wednesday.

In Italy, the first European country to be hit by the pandemic and the one with the highest Covid-19 death toll (more than 70,000), a nurse in Rome will be the first person to receive Pfizer’s Covid-19 vaccination on Sunday.

The nurse works at the Spallanzani infectious diseases hospital, where a couple from Wuhan were the country’s first two confirmed coronavirus cases to be treated in late January.

As he warned citizens to maintain their guard as much as possible over Christmas, Italy’s prime minister, Giuseppe Conte, said the development of vaccines was “a sign of hope for us all”.

After the spring saw northern EU member states squabble with those in the south over a united fiscal response to the pandemic, Christmas is promising to bring some longed-for unity.

A perfectly synchronised take-off across the continent has been hard to achieve, however. Vaccines in the Netherlands won’t be administered until 8 January, as the IT system required for planning and registering the vaccinations won’t be ready in time for the new year. In non-EU Switzerland, a broader immunisation campaign won’t start until 4 January.

Some states jumped the gun: Hungary started vaccinating yesterday, after enough doses to vaccinate 4,875 people arrived in Budapest on Saturday morning. In the eastern German state of Saxony-Anhalt, a 101-year-old woman in a care home become the country’s first to receive the jab on Saturday afternoon.

Across the rest of Germany, where some 29,000 people have died of or with the virus this year, the start of the programme will be gradual rather than emphatic. The mobile teams taking off at Berlin’s Tegel can each vaccinate 50-80 people per day, meaning it will take approximately six weeks to vaccinate the 30,000 people living in care homes across the German capital.

Newly set-up vaccination centres, such as the Treptow Arena concert hall, where up to 2,000 people can be given the jab per day, are not expected to be put into action until the second week of January.

The symbolism of choosing Tegel as the launchpad for the first stage is ominous: the airport in Berlin’s northwest was once scheduled to close down in 2012, but had to stay open for another eight years as the completion of the new Berlin- Brandenburg airport ran spectacularly behind schedule.

The delayed arrival of the Pfizer doses has also triggered similar cries of frustration. Developed by German company BioNTech in the city of Mainz, the vaccine will be rolled out in Germany two and a half weeks after the first doses were administered in the UK, and a week after the first jab in the US.

Germany is expected to initially receive 400,000 doses – compared with about 500,000 people who received their first jab in the UK between 8 and 20 December. Another 11 to 13 million doses are to follow by March – only a fraction of the amount Americans are receiving, and a small percentage of the 100 to 120 million doses required to vaccinate 60 to 70 per cent of the population and thus stop the spread of the virus.

According to health minister Jens Spahn, Germany opted for a joint European procurement strategy that would result in a regular authorisation rather than an emergency-use clearance for the vaccine, and thus hopefully a higher level of trust among the wider population.

But slow bureaucracy at the Amsterdam-based European Medicines Agency rankled German officials, and the decision to move forward the approval date for the vaccine came after pressure from Berlin and other European capitals.

“Every country could have chosen to buy the vaccine themselves,” Spahn said in the Bundestag on 16 December. “But we made a very conscious decision to go down this path together at a European level, that we are stronger together. This is true in this pandemic, in everyday life, in taking care of each other, but it is also true in European solidarity.”

Nonetheless, a few days after that statement Spahn’s government opted to secure another 30 million doses of Pfizer/BioNTech vaccine under a bilateral contract.

“In Berlin and at EU headquarters in Brussels, too little action was taken for too long, and it was often justified with complacent arguments,” wrote weekly Der Spiegel in a scathing article.

The investigative weekly news magazine accused the European Commission of having bought “too little, too late and at times from the wrong producers”. The EU did not place its order with Pfizer/BioNTech until November, after its vaccine became the first to be approved by western regulators.

An order for 300 million doses with Sanofi turned out to be a poor bet: the French company has postponed possible approval for its vaccine candidate to the end of 2021. A further 225 million vaccine doses ordered from German-based CureVac aren’t expected until the summer. At least the Moderna vaccine, of which the commission has ordered 80 million doses, is expected to be cleared by the EMA in the first week of January.

German health minister Spahn has said he remains hopeful that 60% of his country’s population of 83 million could receive the two shots required to achieve immunisation by the end of summer 2021.

“Autumn, winter and Christmas of the coming year are not to be overshadowed by the pandemic,” Spahn promised in a press conference on Saturday.

Whether EU countries will meet their immunisation targets in the summer hinges on the AstraZeneca vaccine. The Anglo-Swedish pharmaceutical sold an order of up to 400 million doses to the EC in August and initially made fast progress in the clinical trials, but its candidate is held up by questions over the reliability of its trial data.

“If the situation stays as it is now,” wrote Der Spiegel, “there will not be enough vaccine available to get the pandemic under control in Germany before autumn.”

UK and Russian foreign ministers to meet in next fortnight, Russia says 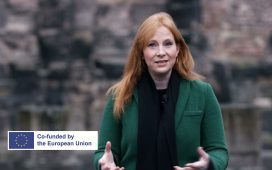